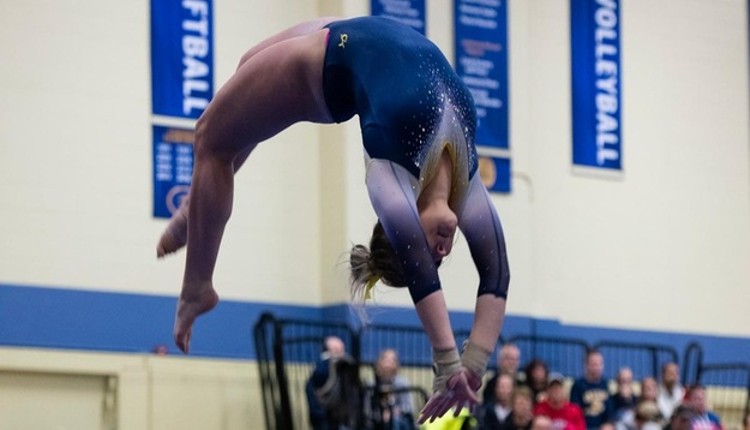 Coach DeZiel said the team is excited for the season to begin with new energy.

DeZiel said her head coach at Nebraska mentioned the position at UW-Eau Claire, leading to her current position.

“I think she’s been a huge asset,” Danielle Malecha, a fourth-year gymnast on the team, said. “I think she is exactly what we needed to take us from good and make us great.”

Malecha said a lot of the things DeZiel has started incorporating in practices has been going well so far in the lead up to the start of their season in January.

The sport of gymnastics is very mental, she said, so having DeZiel come in after the impact of COVID-19 in the last season and switch up how the team does things has impacted the team’s mental state and energy positively.

Last year, the team was only able to participate in four meets as opposed to the regular nine due to COVID-19, Emma Barry, a third-year gymnast, said. They also were not able to compete in their regional competition.

“(I think) everyone is just trying to get back into the swing of things (and that) is the most challenging thing,” Barry said. “But other than that, I feel like we’re going to have a great season this year.”

Gymnastics meets are run by competing in four events, DeZiel said. Six people compete in them— which are balance beam, uneven bars, floor exercise and vault. The top five scores are used to calculate the team’s score.

For scoring, every event starts at a 9.4 score, DeZiel said. After that, whatever skills or bonus points a gymnast gains are what help calculate the point value, which at its highest can be a perfect 10.0 score.

One of the team’s greatest strengths this year is their teamwork, despite how big the team is. Gymnastics is an individual competition sport, however most of the team goes in wanting to win for each other, Barry said.

“You’re competing on the events by yourself and you’re getting your own score but you’re doing it for the team because you want to be able to win against the other team,” Barry said.

There are 23 girls on the team this year, with most of the team made of upperclassmen. There are just seven gymnasts this year who are first- or second-year students, leaving the remaining members of the team either in their third-year or above, DeZiel said.

“It’s been nice having the upperclassmen in the gym kind of lead the way for these freshmen and sophomores,” DeZiel said. “They’re really stepping up, getting on board with everything because they are the leaders that have been there for four or three years.”