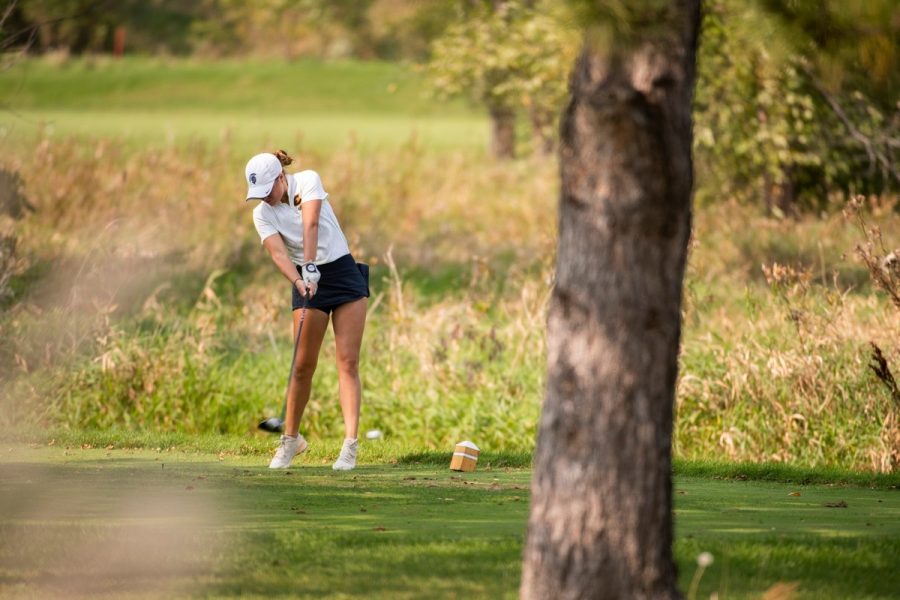 UW-Eau Claire finished third for the week after gaining a lead after round one.

The three-day tournament was held at Reedsburg Country Club in Reedsburg, Wisconsin on Oct. 8-10, the yearly site for the event.

After Friday’s first round, UW-Eau Claire held a one-stroke lead, shooting a team score of 321.

Lexi Meade, a third-year golfer for UW-Eau Claire, also held the individual lead after shooting a round one score of 74, which was the lowest individual score recorded in the tournament for the week.

Skinner said the team’s success on day one was a result of good preparation.

“We had a game plan designed and we stuck to that game plan,” Skinner said. “We were able to focus and hit the shots we needed to.”

Megan Glaeser, a fourth-year golfer for the Blugolds, said the team was able to play freely right away on round one and did not put too much pressure on themselves for the important tournament.

“I think everyone just had fun,” Glaeser said. “We didn’t get nervous at all.”

On Saturday’s second round, the Blugolds shot a team score of 330, which placed them 17 shots behind UW-Whitewater, who scored a 311 on that day and went on to win the tournament by 11 strokes.

UW-Whitewater’s winning score was a 958 for the week, with UW-La Crosse finishing second with a 969 and UW-Eau Claire taking third with a 976.

UW-Eau Claire recorded a 325 on Sunday’s final round, 11 shots behind UW-La Crosse’s 314 which knocked the Blugolds down to third place.

Skinner said the third-place finish was the best result the women’s golf team at UW-Eau Claire has had since 2015, and he was proud of how they competed.

“As a whole, the team has grown and developed a great deal and players have continued to get better,” Skinner said. “I’m proud of the progression.”

Glaeser said the course conditions were better than usual for October, noting that it is usually cold and rainy for the tournament but this year the course “played beautifully.”

Skinner said increased wind on day three made the final round more challenging but overall it was good conditions for the month of October.

Glaeser said the team putted well all weekend and did a good job of understanding the greens.

“That’s usually the hardest part of a tournament is to understand the greens.”

She said the biggest challenge of the weekend was hitting greens in regulation and figuring out how to hit good approach shots into those greens.

As this season comes to a close for the Blugolds, Skinner said this team will only continue to get better over time, noting that the team only had one senior and one junior in the lineup this year.

“As long as they work hard the results come,” Skinner said. “This year is just the beginning indication of where they can go.”