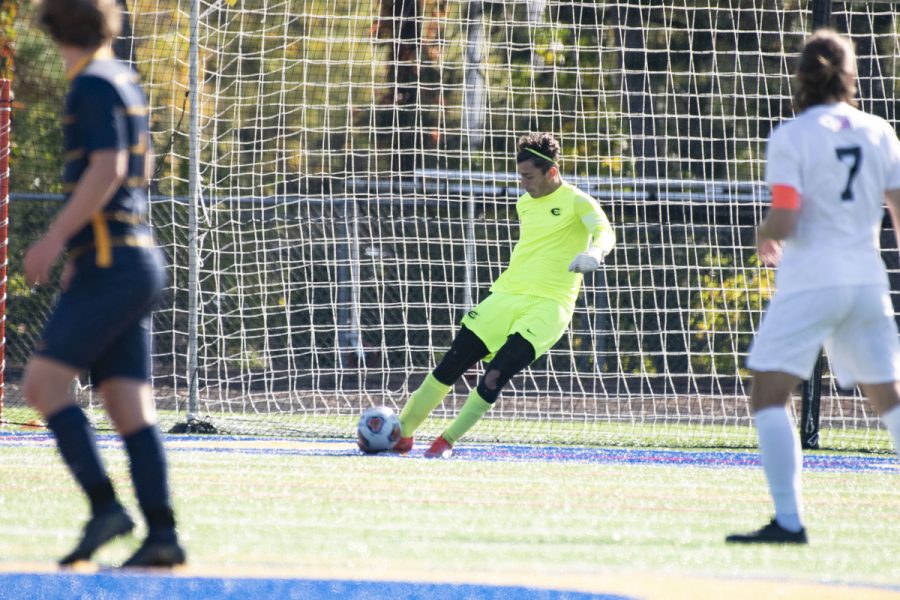 UW-Eau Claire suffered a 4-0 loss to Carthage College after their overtime win the day before.

After a nine-day break in the schedule, the UW-Eau Claire men’s soccer team returned to action this past weekend with back-to-back matchups against UW-Whitewater and Carthage College.

Casey Holm, UW-Eau Claire’s head coach, said the team used the week off to get healthy as the team dealt with a lot of injuries.

The Blugolds split their weekend slate of games, winning 2-1 against UW-Whitewater at Simpson Field on Saturday, Oct. 16 and losing 4-0 against Carthage College on Sunday at Art Keller Field in Kenosha, Wisconsin.

UW-Eau Claire was able to come from behind at home against UW-Whitewater after a slow first half by making halftime adjustments, Holm said.

UW-Eau Claire was held scoreless in the first half and gave up one goal to trail 1-0 at halftime.

Holm said the Blugolds were able to find the holes in UW-Whitewater’s defensive scheme in the second half, which allowed them to finally capitalize after many scoring opportunities.

Donovan’s game-tying goal was his 13th of the season which leads the UW-Eau Claire team.

At the end of regulation, both sides remained tied at 1-1.

Six minutes into the overtime period, AJ Johnson, a second-year forward, put the game away for the Blugolds.

Johnson received a pass from Carter Thiesfeld, a first-year midfielder, and then broke to his left, dribbled around two UW-Whitewater defenders and slotted the ball to the far side of the net to give the Blugolds a 2-1 win.

Johnson said he knew the Blugolds had UW-Whitewater on the ropes in the second half, as they had many scoring chances that just did not go in. He said the team was very confident they would leave with the win in the end.

“We worked really hard the whole entire game,” Johnson said. “We knew if we came out and outworked them and did what we know how to do we were going to win that game.”

Away vs. Carthage College

After winning the day before, the Blugolds failed to extend their six-game winning streak on Sunday, falling to Carthage College 4-0.

The game was scoreless in the first half, but a physical game and multiple injuries from the day before wore down the Blugolds in the second half, Holm said.

Holm said UW-Eau Claire dealt with multiple injuries and got “beat up” in a physical first half. He said they did not have enough left in the tank in the second to come from behind after falling behind multiple scores.

“After we got two quick goals scored on us I pretty much subbed everyone out,” Holm said. “We were up against it so I just kind of sold out and let it go.”

Holm said having a team compiled of underclassmen makes for a learning curve in adverse situations.

“We need to get older,” Holm said. “With games like that, it’s experience, playing on a back-to-back against two really good teams.”

Johnson said despite being a young team that is still getting used to the physical toll of playing a packed schedule of games, they believe in each other.

“I think we know we have to go and prove that we’re a team that’s valid and competing nationally and regionally, whatever it comes down to,” Johnson said.

Holm said he loves the mentality of his team and their perseverance.

“They always find a way to win,” Holm said. “Most of our games have all been very close, but somehow we’ve almost always found a way to come back and win.”

The Blugolds return to the field on Tuesday, Oct. 19 as they go on the road to face Lawrence University in Appleton, Wisconsin.

Johnson said the team is looking forward to the opportunity to rebound from Sunday’s loss.

“I think we know we need to come back from our loss on Sunday and I think that’s exactly what we’re going to do,” Johnson said. “Play our game and work hard once again and we’ll get the win.”