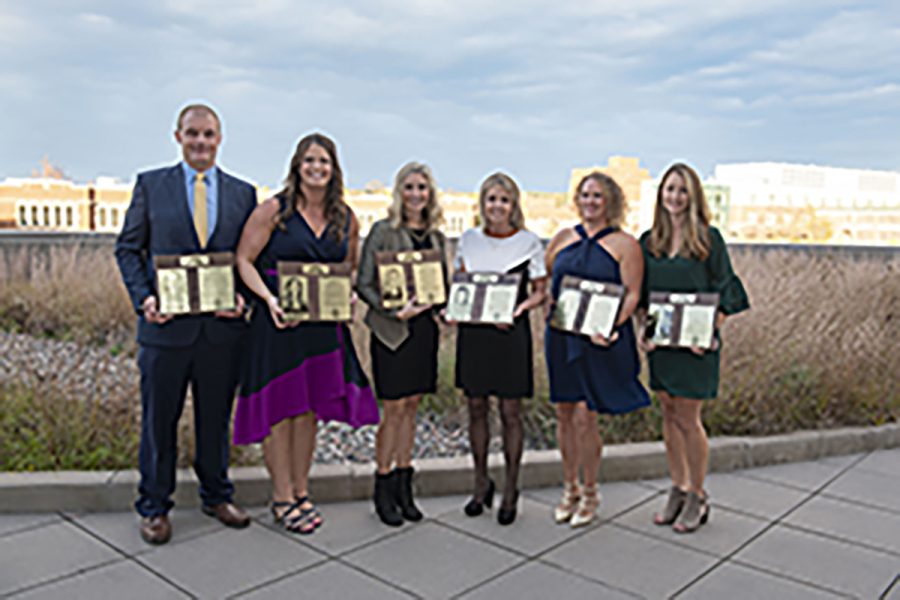 The 2021 Hall of Fame inductees pose with their plaques

On Friday, Oct. 15, six alumni were inducted into the Blugold Hall of Fame. Every year, the Hall of Fame inducts five to ten alumni into their ranks. According to Tim Petermann, executive director of the Hall of Fame, inductees have to meet an impressive set of criteria to be eligible.

Petermann said the initial criteria for eligibility includes having graduated at least 15 years ago and generally having accomplishments such as All-American or All-Conference titles.

In honor of this year being the 50th anniversary of Blugold womens’ athletics, Petermann said the committee put special emphasis on selecting outstanding women for this year’s Hall of Fame class.

“It’s just so cool to be a part of the Hall of Fame the year they’re celebrating the 50th anniversary,” Green said. “It’s been wonderful to see the women’s athletic programs grow over the years and I feel lucky to be a part of that celebration.”

Petermann said the selection committee often will time the induction of Hall of Fame athletes to coincide with other athletes influential to their career or life.

For this year, Petermann said that meant waiting to induct Bob Schmidt until his wife, Brooke, was also eligible so they could join the Hall of Fame as a husband-wife duo.

Schmidt said she appreciated being able to join the Blugold Hall of Fame alongside her husband, Bob.

“We met at UW-Eau Claire, and through sports, too,” Schmidt said in reference to her husband. “So it was really special to be inducted together, and to have our kids and family there with us.”

This year’s nominees were honored with a banquet on Oct. 15, followed by an introduction the next day at the homecoming game against UW-River Falls. The inductees also participated in the homecoming parade that day.

“It was such a tremendous honor,” Green said. “When I got the call from Tim Petermann, I was in disbelief and I couldn’t believe it’s already been fifteen years since I graduated. It was an awesome weekend.”

Petermann said he appreciates the opportunity to connect with alumni and make an impactful experience for them.

“I’ve been retired for 14 years,” Petermann said, “but I continue running the Hall of Fame because I really enjoy being able to associate with these quality people, and being able to bring them back and honor them is really special.”

The Blugold Hall of Fame can be viewed in the McPhee Physical Education Center, as well as digitally on the Blugold Athletics website.