Blugolds move to 14-2 for the season, putting them in 1st place in WIAC standings 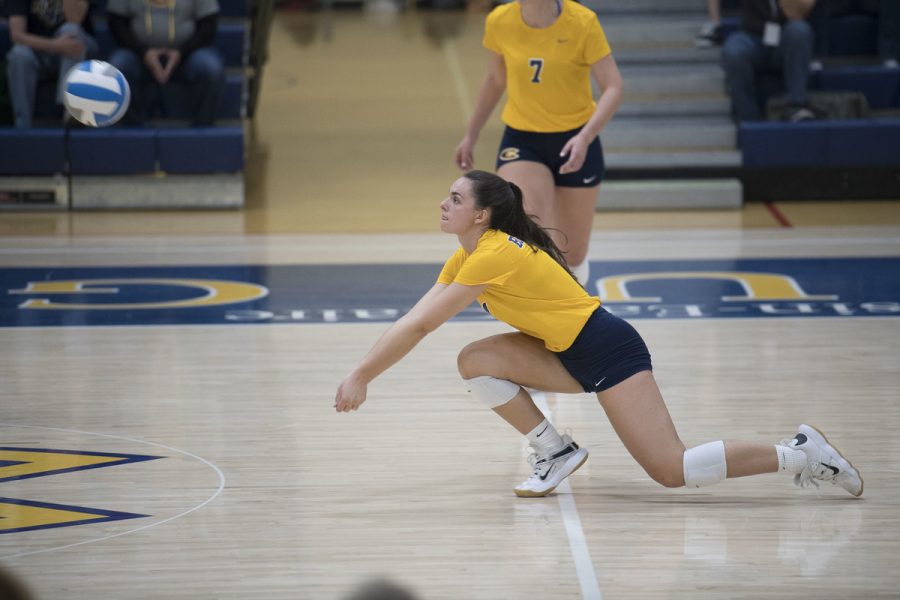 The UW-Eau Claire volleyball team continued their winning streak on the road against St. Scholastica.

With a six-day break in between, the UW-Eau Claire volleyball team added two more wins to their resume, recording 3-0 sweeps against UW-Whitewater and St. Scholastica.

On Wednesday, Sept. 22, the Blugolds hosted UW-Whitewater in their first home match of the season at McPhee Physical Education Center, emerging victorious with a 3-0 sweep.

Kim Wudi, the team’s head coach, said the team was thrilled to finally host a home match again after last season was cancelled amid the COVID-19 pandemic.

“It was really fun to be back in our home gym,” Wudi said. “After not playing for a long time, it was good to be back in front of fans.”

Wudi said the team excelled both offensively and defensively in this game, with the offense hitting for a high percentage and the defense playing aggressively and getting lots of blocks, frustrating the opposing hitters.

“I think we were really crisp and efficient in all phases of the game,” Wudi said.

Wudi said they tried to spread themselves out on offense as much as possible in this game, and that Barrett and Bachmann’s big performances were also a credit to the team’s middle hitters, who were “holding blockers all day long.”

Abby Volk, a fourth-year middle hitter, said the team was able to rally behind the home fans and play as one cohesive team, and everyone was “smiling and having fun.”

The Blugolds have a large selection of seniors playing big roles on the team, which Wudi said helps the team maintain a sense of urgency on the floor with this season being their “last shot.”

Wudi said having so many quality senior leaders helps the younger players adapt to the college game.

“Their composure on the court is a testament to the amount of reps and everything they’ve done over their careers, even before they got here,” Wudi said.

After the match against UW-Whitewater, the Blugolds got a six-day break, returning to competition on Tuesday, Sept. 28 against St. Scholastica at the Reif Gymnasium in Duluth, Minnesota.

Volk said the long weekend allowed the team to relax and let their bodies recover after starting the season with 15 matches in a short period of time.

Before the match, Wudi said the team’s goal against St. Scholastica was to not beat themselves with mistakes and “focus on our side of the net and play our game.”

The Blugolds gained an early lead in this match, including going on a 12-point run in the middle of the first set, which UW-Eau Claire won 25-14.

The second set saw six lead changes, but the Blugolds were able to rally and win this set 25-22. They went on to win the final set 25-16 to complete the 3-0 sweep.

Bachmann led the team with 16 digs in this match, while Jordan Witzel, a third-year outside hitter, led the team in kills with nine.

This win gives the Blugolds a 14-2 record for the season, which puts them in first place in the WIAC standings. They have moved up to the 11th ranked team in the nation.

UW-Eau Claire returns to action on Friday, Oct. 1 when they will face UW-Oshkosh on the road. First serve is scheduled for 7 p.m. at the Kolf Sports Center.

Volk said after starting the season off with such a fast start, the team is focusing on continuing to improve.

“We all push each other each day to see how we can improve, and we can improve everywhere. There’s always room for improvement,” Volk said.