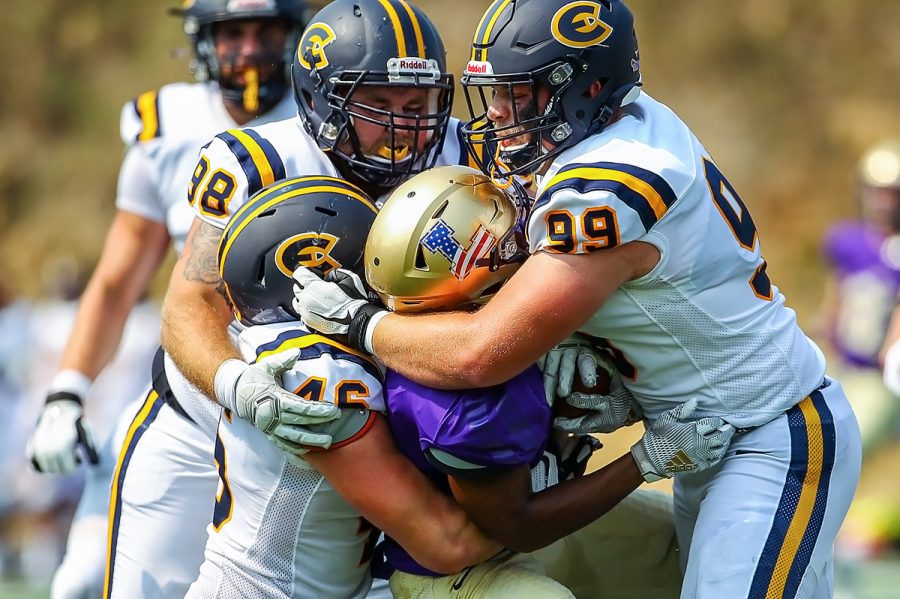 The Blugold defense held Loras College to six points while allowing the offense to run away with the game in the second half.

For the second time in over a decade, the UW-Eau Claire football team has won their first two games of the season.

The Blugolds traveled to Loras College for their first road matchup of the season, emerging victorious 28-6.

UW-Eau Claire scored first, cashing in on an eight-yard touchdown pass from Johnathan Malueg, fourth-year quarterback, to Joe Swanson, a fourth-year tight end. The Blugolds took a 7-0 lead into halftime.

Carmelo Rosado, a fourth-year defensive back, said the Blugold defense was able to maintain the opposing offense during the low-scoring first half and allow the offense to catch fire and secure the win in the second half.

“When the offense struggles we have a lot of pride in helping back them up, and knowing we can help change the momentum of the game,” Rosado said.

While holding onto a narrow 7-6 lead amidst a low scoring affair into the second half, the Blugolds scored on a three-yard touchdown run by Nicholas Kudick, a third-year wide receiver, with 1:44 left in the third quarter to gain a 14-6 lead.

This was the first of three more scores for UW-Eau Claire, as a few minutes after, Austin Belot, a fourth-year running-back, scored on a 36-yard touchdown run to give the Blugolds a 21-6 lead.

Wesley Beschorner, the UW-Eau Claire head coach, said the team played poorly on offense in the first half, but was proud that they “stayed in the game and kept battling.”

“We started throwing the ball better and that opened things up,” Beschorner said.

Beschorner added the team was successful in making important adjustments on both offense and defense at halftime, which allowed them to run away with the game in the end.

The Blugolds capped off their scoring with a 4-yard touchdown pass to Trey Fitzgerald, a second-year athlete, from Johnathan Malueg, fourth-year quarterback, resulting in a 28-6 final score.

Belot, who set the school record for rushing yards last week with 364 yards on 17 carries, rushed for 126 yards on 21 carries against Loras College.

In the passing game for the Blugolds, Malueg completed 12 of 21 passes for 123 yards and two touchdowns. Isaac Garside, a third-year receiver, led the team with three catches for 34 yards.

Beschorner said the team has lots of depth at the wide receiver position, which allows them to spread the ball around to lots of different targets on offense.

“I think we need to spread that out,” Beschorner said.

The Blugolds had 350 yards of offense and held Loras to 310 yards.

On third downs, the Blugold defense held Loras to a 5-15 conversion rate.

On defense for the Blugolds, Spencer Van Pietersom, a fourth-year linebacker, led the team in tackles with nine while Rosado recorded eight tackles and an interception.

The Blugolds have their bye next week, after which they will travel to Albion, Michigan to take on Albion College on Sept. 25 at noon.

Rosado said the team will use the bye week to rest up and work on their fundamentals.

“We’re hoping we refine our skills this week and keep it rolling next week against Albion,” Rosado said.