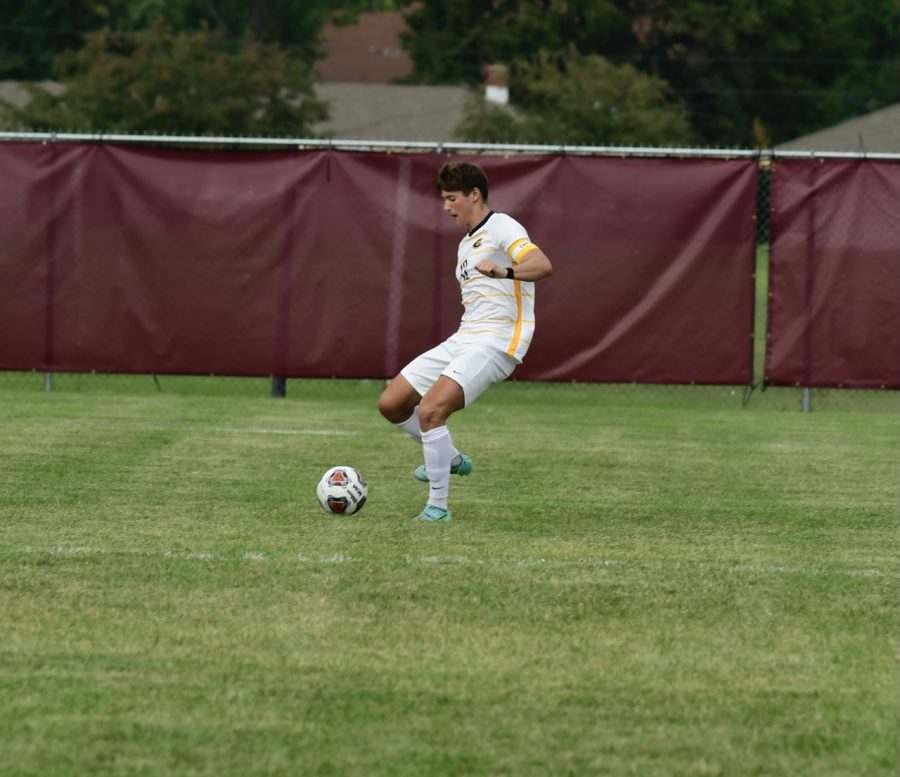 The Blugolds have won three in a row following a 2-1 loss against Loras.

The UW-Eau Claire men’s soccer team is sporting a 4-1 record following two wins on the road this weekend and a win in the home opener against Northland College.

The Blugolds’ inaugural season so far has been one involving a three-goal comeback, back-to-back games and a total of 16 goals in five games.

The team is a relatively young one, with four second-year and 27 first-year students filling the 31-person roster. According to Casey Holm, head coach, none of the players have ever played a season of NCAA soccer before.

According to Matt Folden, a first-year midfielder, being a part of a fresh program has its advantages.

“My high school made it to two straight state championships before I was on the team,” Folden said. “An established program comes with expectations. A new program competing and winning games catches teams off guard.”

The team’s season began with three straight goals in its opening match at Hamline University. Towards the end of the first half, the Blugolds got on the board as a ball bounced in off a defender. Come halftime, the Blugolds had a two-goal deficit to overcome.

Less than two minutes into the second half, Nathan Donovan, a first-year forward — assisted by Porter Ball, a second-year forward — cut the lead to one and became the first men’s soccer player to score a goal for the UW-Eau Claire program.

The game went scoreless until the last minute of regulation play, when Folden — assisted by Evan Wilson, a first-year defender — scored the game-tying goal, sending them to overtime. Overtime went on for more than 18 minutes before the game-deciding goal.

In overtime, AJ Johnson sent a cross — a pass from the side into the middle — that bounced off a Hamline defender and into the goal, securing the victory for the Blugolds.

The team’s second game was a 2-1 loss to Loras College, decided by a goal in the minute 80 after both teams scored in the first eight minutes.

According to Holm, the team left the game feeling excited.

“We played one of the better teams around,” Holm said. “We already knew that would be a good test, and we were a kick off the post from winning.”

After the loss, the Blugolds had two games on the schedule in a two-day span. They won both, defeating Concordia-Moorhead 2-1 and Nebraska Wesleyan 3-2. Folden said recovery is important both mentally and physically in between back-to-back games.

In the Blugolds’ home opener, they defeated Northland 6-1, improving their record to 4-1 and scoring three goals in each half. They had 22 shots on goal to Northland’s six, consistent with the brand of soccer Holm said he and the Blugolds are working on establishing in their first season.

“We like to play an attacking style of soccer,” Holm said. “We want to give the fans something to cheer about and score a lot of goals.”

The Blugolds are currently averaging 3.2 goals and 15.2 shots per game.

The Blugolds play Carrol College this Friday and UW-Superior this Sunday — both away games — before returning home on Wednesday, Sept. 22 to play Ripon College.