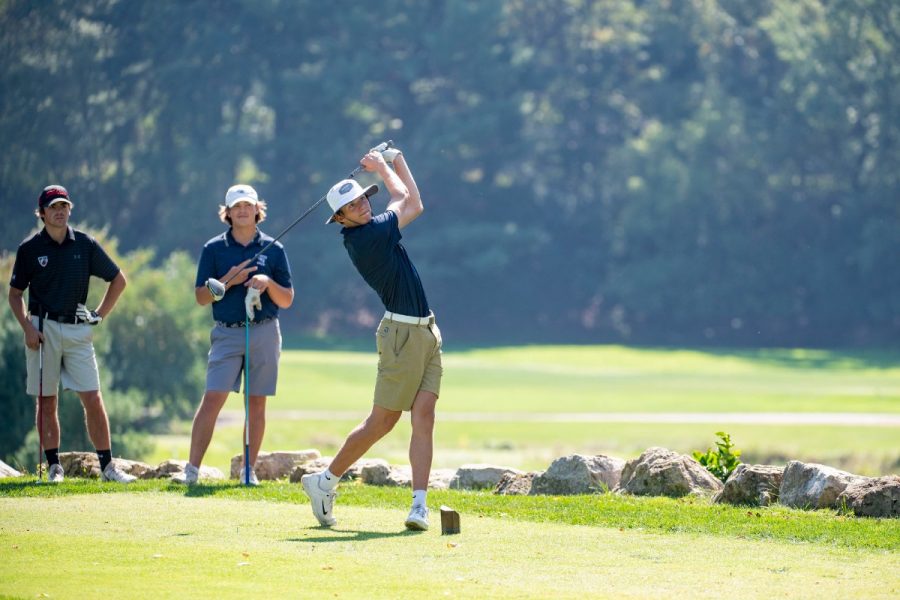 Covey said the Blugolds had the advantage of being familiar with the Eau Claire Golf & Country Club as their “home course.”

The UW-Eau Claire men’s and women’s golf teams were both in competition this past weekend, as the men’s team took first place in the Frank Wrigglesworth Blugold Invitational and the women’s team finished tied for eighth at the Division III Classic.

The men’s golf team competed in the Frank Wrigglesworth Blugold Invitational on Sept. 19 and 20 at the Eau Claire Golf & Country Club, taking first place in the tournament overall as a team out of the 12-team field.

Owen Covey, a first-year golfer for UW-Eau Claire, was the co-medalist individual champion after shooting 11-over par for the tournament with a 77 and a 76.

Matt Fladten, a fourth-year golfer for the Blugolds, finished tied for sixth after a 14-over par tournament with 77 and 79.

Fred Moede, a first-year golfer for UW-Eau Claire, finished tied for 12th after a 17-over par tournament with an 81 and a 78.

Covey said he was able to win by playing consistent golf and putting well, as he did not miss a single putt inside of eight feet.

“I was pretty steady the whole way around; didn’t make a lot of mistakes,” Covey said.

Covey said the Blugolds had the advantage of being familiar with the Eau Claire Golf & Country Club as their “home course,” as the tough greens and big slopes can present their fair share of challenges.

Covey said the windy conditions made the course play even tougher than normal for the tournament.

The men’s golf team returns to action this Saturday, Sept. 25 at the Twin Cities Classic in Ramsey, MN at the Links at Norfolk.

The UW-Eau Claire women’s golf team competed in the 2021 Division III Classic hosted by Gustavus Adolphus College in Hastings, MN at the Emerald Greens Golf Course, finishing in a tie for eighth at 72-over par.

The overall champion for the tournament was Bethel University with a team score of 49-over par.

Megan Glaeser, a fourth-year golfer for the Blugolds, said the team showed a lot of improvement in the second day of the tournament, pulling through tough, windy conditions.

“As a team we all really embraced the second day,” Glaeser said. “We embraced the conditions because it was the same for every person out there.”

Jaden Woiwode, a first-year golfer, was the top individual finisher for the Blugolds, shooting a pair of 79’s to take 12th place.

Lexi Meade, a third-year golfer for the Blugolds, shot 80-79 to finish the tournament tied for 14th.

Glaeser said the course itself was scoreable and allowed for plenty of birdie opportunities, but the heavy winds on Sunday made the second round more challenging.

Since the start of practices in August, Glaeser said the four new freshmen on the team have gotten acclimated quickly and the team has turned into a tightly-knit group already.

Glaeser said the key to playing good golf for the team involves mastering the mental side of the game even more so than the physical.

The women’s golf team returns to the course Friday, Oct. 1 at the Falcon Invitational at Clifton Highlands Golf Course in Prescott, WI.