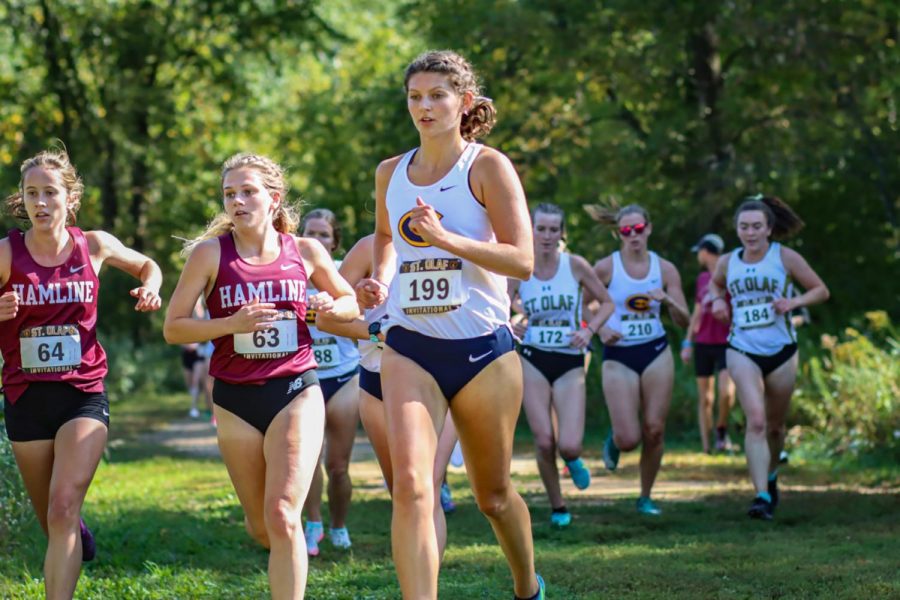 The Blugolds raced in Northfield after missing a season

According to Connor Dolan, a fourth-year runner, this was their first race against other teams in nearly two years.

“It felt like coming home,” Dolan said. “After all that time off, stepping on the grass to race again felt really good.”

According to Dan Schwamberger, the cross country head coach, a lot of the team’s runners are also long-distance runners for the track and field program, so he said coming back after missing a season felt surprisingly close to normal.

Dolan said he wanted to stay focused and stay in shape in order to come back strong.

Schwamberger said he’s in his fifteenth season as head coach and that his coaching philosophy has changed over the years.

“When I started, I was mainly focused on specific training,” Schwamberger said. “Hills, interval training, etcetera. That’s still important, but there’s a greater emphasis on maintaining the positive culture we have built up over the years.”

He said when he started coaching, there were a number of third and fourth-year students who were good leaders and promoted a positive attitude.

Schwamberger said the main focus moving forward is to get ready to race for conferences — currently scheduled for Oct. 30.

“Today was a great start to see where we’re at,” Schwamberger said. “The main focus is staying healthy and continuing to progress.”

“Today’s results show we’re in a good spot,” Schwamberger said. “Now we’re making sure to err on the side of caution, being smart instead of risking injury.”

Faris said a race is as difficult mentally as it is physically. Pushing through pain and fatigue as well as remembering to pace oneself and stay composed are the keys to a successful race, and throughout the season the same philosophy is true.

Faris and Dolan both said that the course at Saint Olaf isn’t a quick one — another way of saying it’s challenging to race there.

The next race for the Blugolds is the UW-Eau Claire Blugold Invitational on Oct. 1. The men’s team races at 4:15 pm and the women race an hour later at 5:15 pm.