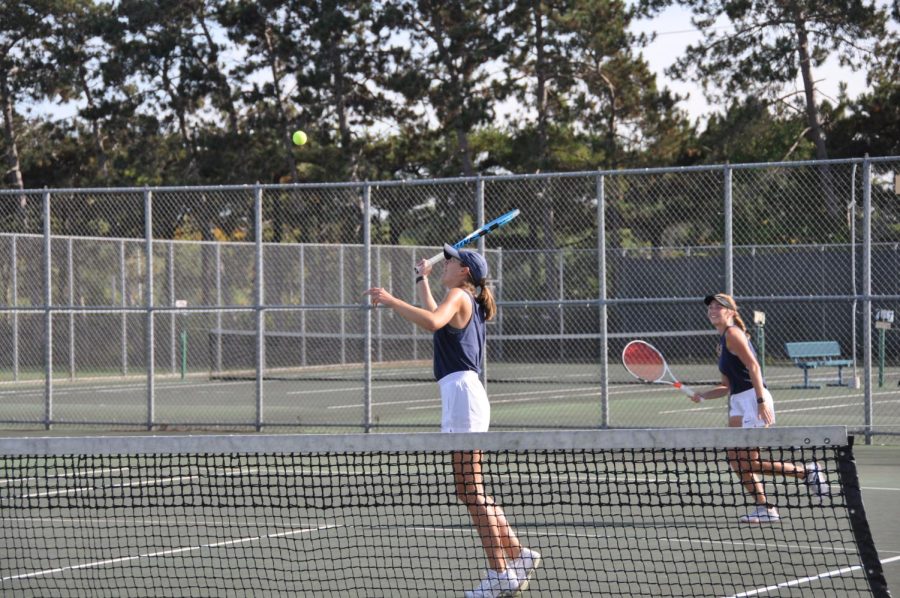 Doubles partners, Henderson and Franta, serve a tennis ball as they practice against their fellow teammates for their national tournament. Both place 2nd overall at the ITA tournament and will play at Berry College in Georgia for the national ITA competition.

The University of Wisconsin-Eau Claire women’s tennis team competed in the 2021 Intercollegiate Tennis Association weekend-long tournament this past weekend.

“This is the best tournament that we’ve had in a very long time as a team,” Franta said.

Franta and her doubles partner, Lindsey Henderson, even scored a placement at the ITA national tournament, to take place at the Rome Tennis Center at Berry College, Georgia.

“(My partner and I) are both seniors, we’ve both played together for the third year now,” Franta said. “So, now getting to go on this trip is a huge honor and we’re so excited.”

Henderson, a fourth-year human resources student, said she values the support her teammates have given her and Franta as they proceed to the national competition. It is important to have a positive and close relationship with your doubles partner, she said.

“We’ve formed really good chemistry on the court and are really good friends outside of it, too,” Henderson said. “For at least our games, it’s really important to everybody’s friends with each other.”

Franta and Henderson said they are still in disbelief of their placement in the national competition. This next competition will be a great sense of recognition for the Tennis Program and collegiate women in sports altogether, both women said.

“This is huge for Eau Claire to have as we haven’t had anyone go to Nationals in I think a very long time,” Franta said. “Hopefully, people will see that (accomplishment) and want to come to play tennis here. Hopefully, we are starting something.”

Téa Armstrong, a first-year individual player on the Blugold team, reached the semifinals stage of the tournament, winning against Gustavus, UW-Eau Claire, and Luther College.

The doubles team of Clare Palen, a second-year student, and Samantha Fuchs, a first-year student, also took a win in their first round of matches against St. Mary University, 8-0.

Henderson, as it is her last year on the team, said she is excited to once again have in-person matches with competing universities.

“This was the last chance I had to ever make it,” Henderson said. “With COVID-19 we didn’t have ITA last year, so it was nice to be able to get back into it, have conference matches, and being able to be with the whole team again.”

The women’s team will play next on Sept. 29 at home on the Olson Outdoor Tennis Courts, where they will compete against their neighboring university, the University of Wisconsin-Stout.