Baierl reflects on her athletic career

After winning a Kwik-Trip Athlete of the Week Award, Baierl comments on the important values that come with being a college athlete 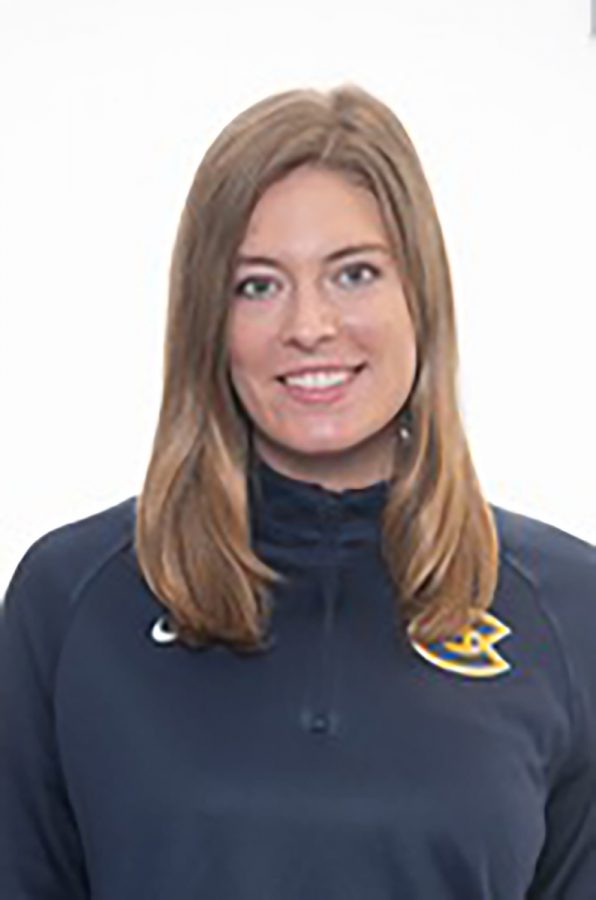 “The thing about Kendra,” Wudi said, “is that she is somebody who never lets the stuff that goes wrong define her or bring her down.”

“The thing about Kendra,” Wudi said, “is that she is somebody who never lets the stuff that goes wrong define her or bring her down.”

Baierl was one of three Blugolds athletes who received the WIAC Kwik-Trip Athlete of the Week Award this week, alongside third-year golfer Lexi Meade and third-year soccer player Kiki Kussow.

During the Blugolds’ Sept 10 game against Augsburg University, Baierl led the team in blocks and averaged 2.36 kills per set.

This performance led to Baierl’s Athlete of the Week award, but when asked about her response to the award, Baierl focused more on the message it sends for the team as a whole.

“Last week my teammate Makenzie (Bachmann, fourth-year outside hitter) actually won the award too, which is great because it sends the message to other teams in the conference that Eau Claire is a strong team they don’t want to mess with,” Baierl said. “One thing that sets our team apart from other teams in the conference or even past Blugolds teams is that anyone (on the team) could win the award. We have a lot of really good players, and every game someone different on the team is having a really good game.”

Wudi, who has been coaching the Blugolds team for fifteen seasons, lists strong character and, above all, passion as the most important factors in making great athletes, and noted that this year’s team has those two traits in abundance.

Baierl reinforced this sentiment. “The thing that motivates me every day is that my teammates are all so passionate,” she said. “You’re not really going to be on a college team if you aren’t super passionate, so it’s just an environment where you’re always pushing each other to be the best you can be.”

Baierl said she has been playing volleyball competitively for over ten years, but this intense passion for the sport didn’t come immediately.

Baierl comes from a basketball family and, initially, volleyball was just a way to set herself apart from her hoop-shooting relatives. Over time, though, this coda of passion and drive became central to her talents as an athlete.

“My greatest strength really is my commitment and passion,” Baierl said. “This is my fifth year, and I wouldn’t have taken a fifth year if I wasn’t so passionate about volleyball.”

Baierl is quick to note that her ability to stand up to adversity is another trait that evolved over time through experience and the support of her coaches, and that is still evolving today.

“I think we all struggle on the team with having high standards for ourselves,” Baierl said. “It’s easy when you have a bad game to get down on yourself and get stuck on it, but our coach has a saying, ‘You either win or you learn.’ So I always try to remember that.”

Now, with a full season underway, Baierl declares she is feeling dedicated and optimistic.

“My goals for me and the team are just to get better every day and never get satisfied. That’s always been my goal my whole life and I think that’s how you get better at what you want to do,” Baierl said. “Our coach always says we should try to get ‘two percent better’ every day. Two percent really isn’t that much on a day-to-day, but it adds up when you’re practicing every day.”

At the end of the day, after last year, Baierl maintains she is simply grateful to be back on the court playing the sport she loves.

“I’m thankful to get a season at all, and our coach put in a lot of work for us to be able to have a kind of normal season. She’s really great. I wouldn’t be the person I am without her,” Baierl said. “The season could still end at any time, so we’re all just really grateful on the team to be able to play at all.”