Blugolds hit four homeruns in sweep of the Falcons 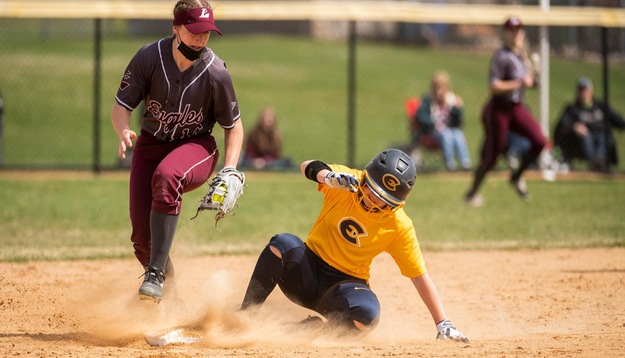 The Blugolds competed in doubleheaders against UW-River Falls and UW-Whitewater last week.

Blugolds traveled to River Falls to play a doubleheader against the UW-River Falls Falcons on April 28.

Then they went back on the road May 1, traveling to play a doubleheader against the UW-Whitewater Warhawks.

Earlier in the season, the Blugolds played a series against UW-River Falls and earned a split.

In this series, the Blugolds defeated the Falcons 3-2 in game one and followed up with a 13-5 win in game two.

“We were expecting to see a lot of improvement, focusing on all the aspects we could improve on since the last time we played them, and I definitely think we were able to do that — especially in the second game,” Megan Maruna, a second-year right fielder, said.

Game one began with three scoreless innings before the Falcons scored a run in the fourth.

The Blugolds responded in the fifth with a three-run effort with runs batted in by Abbey Place, a fourth-year catcher and infielder, and Sadie Erickson, a second-year pitcher.

The Falcons managed to add one more run in the sixth inning, but the Blugolds were able to hold them off — closing the game 3-2.

“Getting game one, especially on the road, has been hard for us this season,” head coach Leslie Huntington said.

The Blugolds have had better luck in the later games of their two-game series this season, earning multiple splits.

“Anytime you can win two games in one day is a good thing,” Huntington said.

Game two began with another three scoreless innings, but in the fourth the Blugolds were first to score a run this time and quickly added another.

The Falcons tied up the game 2-2 in the bottom-half of the inning, but the Blugolds came back swinging in inning five, scoring three more runs — Place hitting one over the fence.

UW-River Falls was quick to respond, adding another two runs and moving the score to 5-4 with Blugolds in the lead.

Still, the Blugolds weren’t slowing down, scoring eight runs in the final inning — closing the game 13-5.

This was the Blugolds’ first time taking on the Warhawks this season.

The Blugolds lost both games to UW-Whitewater — 4-1 in game one and 3-0 in game two.

The Blugolds kicked off game one by earning an early run, but that was their only run of the game.

The Warhawks earned runs in the first, second and third innings — taking a 4-1 lead.

In game two, the Blugolds weren’t able to score any runs, but the Warhawks scored one run in the first and two in the fourth —  closing the game 3-0.

“We didn’t execute the short game very well, and we had some timely mistakes, defensively,” Huntington said.

Maruna said the team learned a lot from the series, about what they can still improve upon yet this season, and they’re hoping, when they see them again in the Wisconsin Intercollegiate Athletic Conference tournament, they’ll be able to pull out a few new tricks, she said.

What’s next for the Blugolds?

The Blugolds have their final non-conference doubleheader against UW-Platteville this Friday, May 7.

Then they will move into the WIAC tournament, beginning May 11, which all eight teams will play in this year.

“It’s not necessarily the physical skills that are the deal breaker at this point, it’s the mental skills, the mental composure,” Huntington said.

That’s what the best teams need to have this time of year, she said.