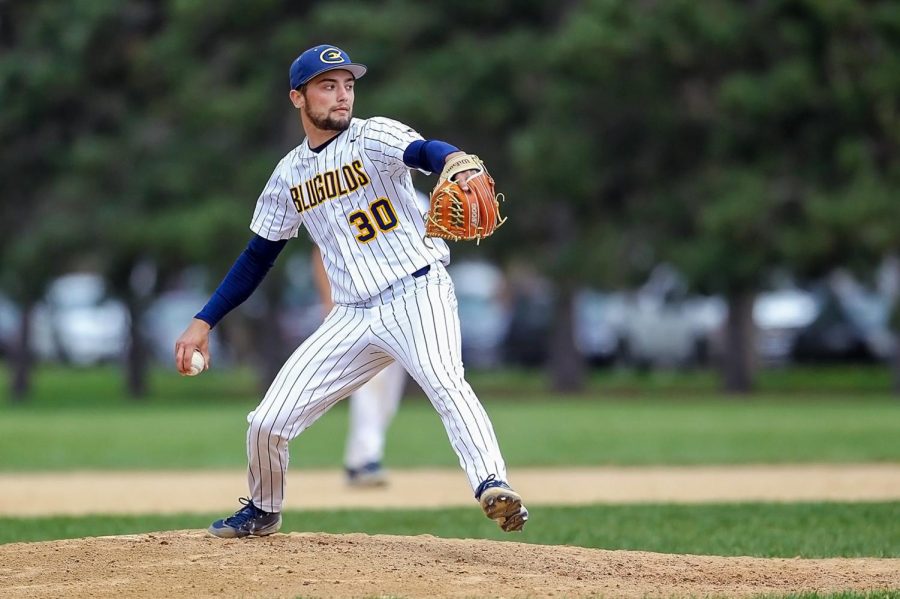 “It just feels like a lot better of a team,” Pecora said. “I feel really confident in this team now.”

Each game ended in a loss for the Blugolds. However, both the head coach and the players say they’ve shown great improvement from the start of the season. In their debut season, the men’s baseball team stayed competitive in games against the top teams in the conference.

On Wednesday, April 28, the Blugolds played a doubleheader at home against the Pointers.

The Blugolds couldn’t get the tying run in and the game ended 2-1 for the Pointers.

Tom Ginther pitched all nine innings and only gave up two runs.

“We had an opportunity to score in multiple innings,” Charles Bolden, the head coach of the men’s baseball team said. “We just couldn’t find those cracks to get through.”

Bolden said it was a well played game by both teams and every pitch mattered. The tying run would have meant extra innings, so he wanted to win it, he said. They had runners on second and third in the eighth which potentially would have won them the game, Bolden said.

Game two started with a run for each team in the first inning. The Pointers scored three runs in the fourth inning, making it 4-1.

Then, in the sixth inning, the Blugolds loaded the bases. A home run by Johnny Pecora, a first-year outfielder, was marked as his first career grand slam. This put the Blugolds up 5-4.

“It felt good to feel our offense and our dugout come to life knowing that we were back in this game,” Pecora said.

However, it did not last. The Pointers put up six runs in the top of the eighth. Pecora answered with a solo home run in the bottom of the eighth, his second home run that game. But the Blugolds were not able to win it, ending with a final score of 10-6.

Pecora said despite having brought in so many runs that game, he was not very frustrated over the loss. He said he was happy to have contributed and “made strides” with the team.

On Saturday, May 1, the Blugolds played a double-header against the Pointers again, this time at Stevens Point.

Game one started with a solo home run by Logan Matson, a third-year shortstop. In the third inning, Nate Witte, a first-year left fielder, hit a two-run home run taking the score to 3-0.

Matson hit another solo home run in the top of the fifth, and the Pointers would score one in the bottom. The Pointers also took one in the fifth and two in the seventh after two from the Blugolds, making the score 6-4.

The Pointers scored one run in the eighth and completed the comeback with four runs in the ninth. The Pointers won 9-6.

Matson said runs in games like these were being given up by routine fielding errors or toward the end of a game when their pitchers walked batters. He said any loss is frustrating, but he is glad to see the team is playing much better than they were at the beginning of the season.

The Pointers scored four in the fifth (8-4) and one in the seventh (9-5). Matson hit his third home run of the day in the top of the seventh.

The Blugolds picked up one more in the eighth but couldn’t mount the comeback. The final score was 9-6 again in favor of the Pointers.

Bolden said the Blugolds have made several improvements over the course of the season. He said they are starting to string together longer and more consistent innings at bat. Starting pitchers are also throwing more strikes and going “deeper” into games, he said.

With a young team where most players have never played college baseball, Bolden said, this season is all about getting them experience. He said he wants players to get used to being in certain situations and “slow the moment down.”

“It’s a learning experience for sure,” Bolden said.