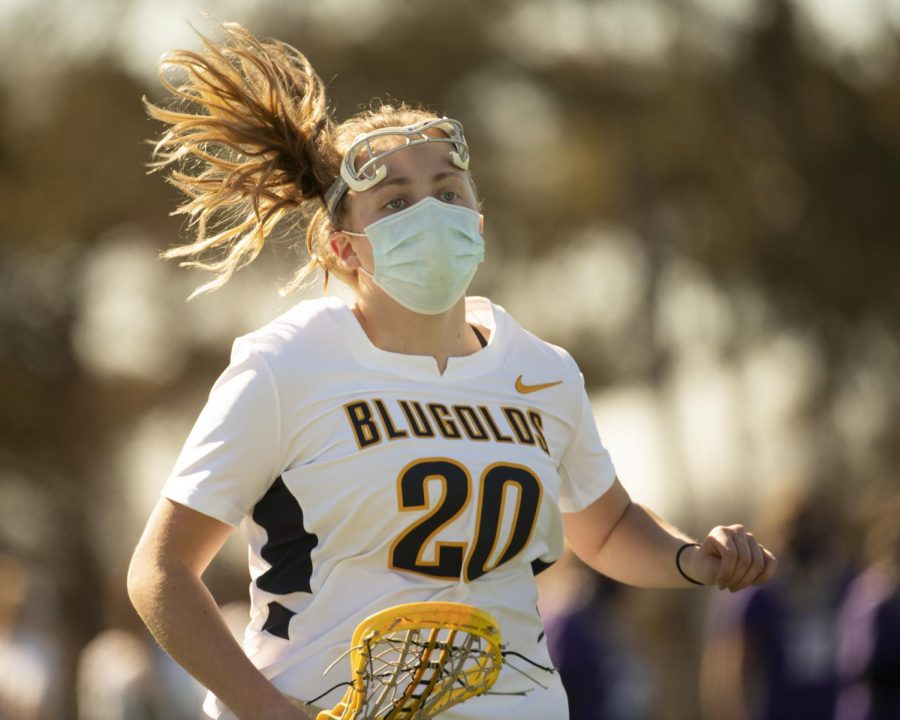 The UW-Eau Claire women’s lacrosse team lost their game to UW-La Crosse 15-4 on April 24. It was the second-to-last game for the Blugolds, whose record is now 4-3 this season.

UW-La Crosse took a strong lead in the first half, gaining ten points to UW-Eau Claire’s two points.  In the second half, the Blugolds weren’t able to recover enough to win the game, but scored two more goals.

“It was just a totally different team, and I was really proud of how they came together and saw what we could do,” Neubert said.

“We knew coming in that it would be a tough matchup,” Larson said. “On attack, I don’t think we played as well as we could have, but for midfield and defense, I think they were outstanding, and some of the best playing that we’ve seen from our defenders. We were really proud of them.”

Larson also said there have been many players stepping up this season and taking roles they weren’t necessarily expected to — changes made necessary by injuries and COVID-19.

Coach Neubert echoed that feeling and said that the players who stepped up pulled a lot of weight for the team.

“We have a lot of girls who will step up and fill positions where there haven’t been any need before,” Neubert said. “We were hesitant even coming into this season about even being able to play because of COVID.  So it just feels good to be out on the field.”

Larson said optimism from the second half of Saturday’s game will carry over to the next game.

“We held them off the scoreboard for the last ten or eleven minutes, that was really huge in our eyes,” Larson said. “We have the capability, and we have what we need to play well, and we have to bring that on Thursday.”

The next game, the last of the season, will be at home on Thursday against UW-River Falls.

“Expect a hard-fought game, we are gonna come with everything we have, lay it all on the field, and end the season on a high note,” Larson said. “We have the capability, we have it all there, we just need to come and have the mindset that we can do it.”

Looking back on the season, Larson said she was happy with the journey the team has made.

“For our first season as a D3 team I think we really came together,” Larson said. “We have a lot of good relationships on the team, and that has been great.”

Neubert agreed, and said even with some losses, it was a strong season that the team accomplished a lot in.

“I couldn’t be prouder of the girls and what they’ve done,” Neubert said. “A lot of people talked about us having a building season, but we took the opportunity to make it our season.”

UW-Eau Claire women’s lacrosse will play their last game at 7 p.m. on Thursday, April 29 at home.