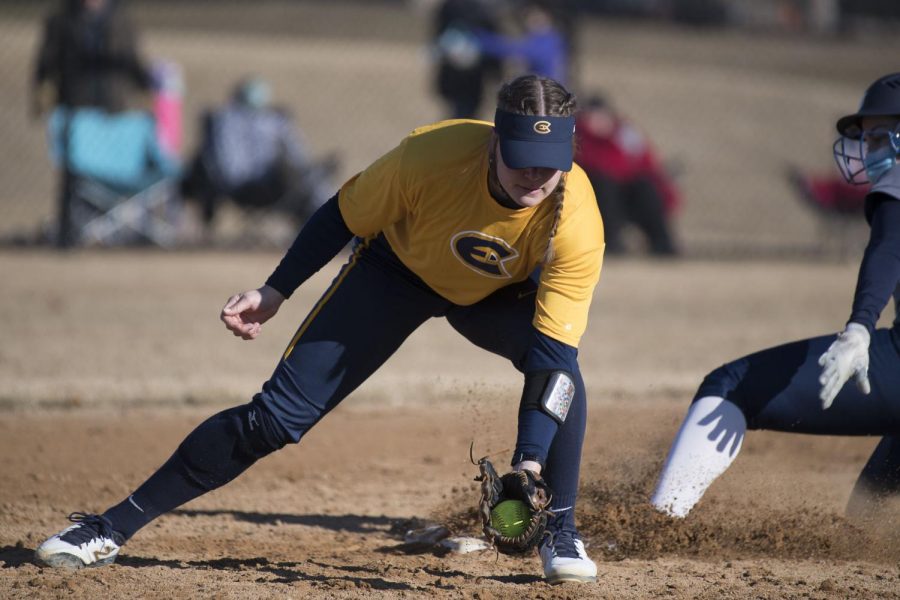 The UW-Eau Claire women’s softball team opened the Wisconsin Intercollegiate Athletic Conference last week, winning three out of four games including a sweep of UW-Stout and a split with UW-River Falls on Senior Day.

The Blugolds swept UW-Stout in the first games of WIAC play this season on Thursday, April 8.

The Blugolds beat the Blue Devils 7-1 in game one and followed up with a 6-0 win in game two.

The Blugold offense struck early in game one with a double from Abbey Place, a fourth-year catcher and infielder, in the first inning. Place was able to score off of a single down the left-field line by infielder Maria Back, making the score 1-0 after the first inning.

The score didn’t change again until the fourth inning when the Blugolds added another run on an RBI single to left field by infielder and outfielder Megan Maruna, making the score 2-0

The Blugolds followed up the fourth inning by scoring five runs after a triple from back and a home run off the bat of Sillman. Another run by the Blugolds in the sixth would make the score 7-0 going into the final inning.

UW-Stout tallied a run in the final inning but was defeated by the Blugolds with a final score of 7-1.

Game two looked similar to game one with the Blugolds scoring early in the second inning. Maruna drew a walk and stole second and third base. She was brought home by a single from pitcher Sadie Erickson, making the score 1-0.

Following the second inning, the Blugold offense continued to produce, scoring another five runs with a combined 14 hits for the team.

Pitcher Madi Zerr, who was just named conference pitcher of the week, struck out six and allowed no Blue Devil runs. She earned a complete-game shutout as the Blue Devils fell to the Blugolds 6-0 in game two.

“I’ve been working on trusting my defense and my offense to be there behind me,” Zerr said. “With all that, changing my mindset has really helped.”

Not only was the pitching and defense solid, but the Blugold bats were working as well.

“All in all we had a pretty solid effort all the way around,” Huntington said.

After sweeping the Blue Devils, the Blugolds hosted UW-River Falls and tallied a split on Saturday, April 10, and took time to recognize the eight seniors on the team for Senior Day.

Head Coach Leslie Huntington said the seniors on the team are a talented group of players, but also great human beings that deserve recognition.

“I feel very fortunate to have been a small part of their lives over the last four years,” Huntington said.

Huntington said celebrating special days gives the team a confidence boost going into games, but can also bring out emotions that can cause them to do things they wouldn’t normally do.

The Blugold offense was slow to get going in game one as the Falcons had put up eight runs before the first Blugold scores of the game, thanks to a home run by catcher and outfielder Ellie Decker in the fifth inning, making the score 8-2.

The Blugolds were able to score two more runs in the seventh inning, but couldn’t pull out the win, dropping game one to the Falcons 8-4.

The Blugolds brought offense to game two scoring a run in the first inning and four more in the second. By the end of the fourth inning, the Blugolds had a 6-0 lead over the Falcons.

“We executed offensively much earlier in the game,” Huntington said. “Getting a run on the board early was a big confidence boost for our team and we just rolled from there.”

In the sixth and final inning, two more Blugolds scored on a triple by Erickson and a game-ending single by Place.

Multiple Blugolds had multiple hits in the game, as Erickson went 3-3 with two RBIs, Decker went 2-2 and a couple more players went 2-3. The team had a total of 13 hits and shut out the Falcons by a final score of 8-0.

The Blugolds will be back in action as they host UW-La Crosse on Wednesday, April 14.