Blugolds move to 6-2 in WIAC competition 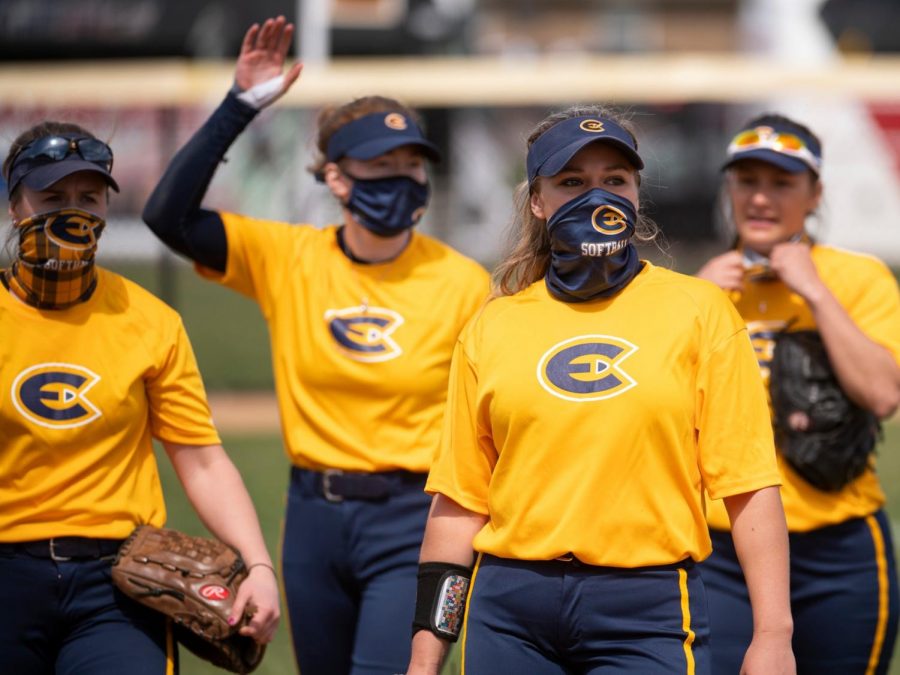 Sivak described the doubleheader against La Crosse as a pitchers duel, while the games against Oshkosh were a battle of the bats.

The UW-Eau Claire softball season continued with two doubleheaders this past weekend, one against UW-La Crosse and a second against UW-Oshkosh.

The Blugolds swept UW-La Crosse on Friday, April 16 at home. In game one, Morgan Sivak, a fourth-year pitcher, tossed a complete-game shutout with only two hits given up to lead the team to a 1-0 victory.

Leslie Huntington, the Blugolds’ head coach, says the wins were secured through a combination of excellent pitching, key defensive plays and timely base hits.

Abbey Place, a fourth-year catcher and outfielder, got the offense started with a shot to center field, finishing 2-3 that game.

The sole run of the game was earned in the bottom of the second inning, batted in by Ellie Decker, a third-year catcher and outfielder.

The Blugolds won game two by a final score of 2-1, with Megan Maruna driving in Jayden Hodgson in the fifth and Katelyn Yute following close behind later that inning.

“Our defense was solid, and we had high energy and focus for both games, which was crucial,” Sivak said, “since we weren’t scoring as much as usual.”

Both games were close and quick, with three-up-three-down innings throughout, Sivak said.

“It was a good old-fashioned pitcher’s duel — that was the highlight for me,” Huntington said. “It was a fun afternoon to be a part of.”

Sivak said after this shutout UW-La Crosse is going to want those games back.

“We’re preparing for the intensity and the short game we know they will bring next time we meet on the field,” Sivak said.

UW-Eau Claire is scheduled to play UW-La Crosse again on May 4.

The bats were alive in the second doubleheader on the road against UW-Oshkosh on April 17. The Blugolds secured the first game against the Titans, winning 6-2, and lost the second 11-9.

In both games, the Blugolds were able to score early and continue scoring throughout the event.

A highlight of the first game was when Sadie Erickson hit a homerun at the top of the fifth inning, directly after the Titans scored three runs. That momentum carried on into the second game.

After losing the first game on their senior night, UW-Oshkosh came back with renewed determination.

Despite taking a two-run lead in the top of the second inning, Oshkosh scored four runs in the fourth. From there, each team matched the other run-for-run. Both teams scored two in the fifth and three in the sixth.

“It was a slugfest,” Huntington said.

In the second game, the teams tried to disrupt the flow of the other by changing pitchers often; however, both teams were able to adapt and continue their momentum.

“Each team was hitting up a storm, but we eventually ran out of innings,” Huntington said.

Like UW-La Crosse, UW-Oshkosh likes to play the short game, Sivak said, and they play it well. They also are a loud team and try to get into their opponents’ heads — but Sivaks said they were able to stay mentally strong despite this.

“We did what we could,” Sivak said. “We kept scoring runs and answering back, but it just didn’t end up coming out on our side.”

Despite the loss, Sivak said she and her teammates are still happy to be able to play despite the COVID-19 pandemic. Coach Huntington is grateful to the players for following the protocols and being responsible so they can continue to play.

The Blugolds return to action at home against UW-Stout on April 22.