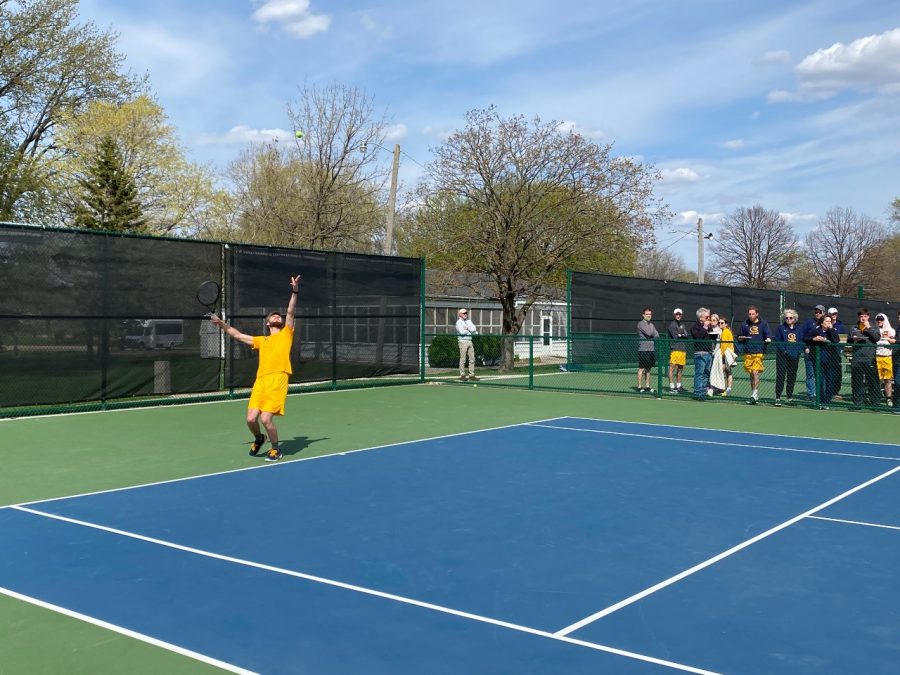 Grant Mauthe serves during one of his last college matches as his father and the rest of the Blugolds men’s tennis team cheer him on.

This weekend, UW-Eau Claire’s men’s tennis team had matches against UW-Whitewater on Saturday, April 17, as well as against Coe College on Sunday, April 18.

The Blugolds lost the away match to UW-Whitewater, 5-4, despite No. 2 and No. 3 victories in doubles by Grant Mauthe and Adam Burk, along with a win from John Foley and Matt Gilbert.

UW-Whitewater, a formidable opponent, has a history of sweeping the doubles, Brian Biernat, the head coach, said.

His advice to Mauthe and Burk was to hold the serve and keep it close.

Coach Biernat said by executing this tactic properly, the team would be able to force the opponents into a tie-breaker. They then would capitalize on their opponent’s nerves and claim the win.

The team took up an I-formation in time with the serve, forcing the returner to change their approach suddenly during match point.

“The goal wasn’t to go for an ace, but to put the ball in play,” Coach Biernat said. “Make them change their mind. The timing and execution are a testament to their hard work — it was unbelievable.”

This is an example of the set plays the teams have practiced thoroughly in practice. To see it come to fruition, as they had practiced it so many times before, was the highlight of the match, Coach Biernat said.

For Grant Mauthe, a fourth-year tennis player, one of the highlights from the UW-Whitewater match came after it had ended.

As the team prepared to meet after the final match, the umpire came up to them, Mauthe said, and complimented the team on how classily they conducted themselves. He admired how they represented not just UW-Eau Claire but the sport, too.

“It’s easy to be a good sport when you’re winning,” Mauthe said. “This just goes to show our mentality and integrity as a team.”

The matches the next day in Rochester, MN tell a different story. UW-Eau Claire managed a 6-3 victory against the Kohawks with wins in No. 2, No. 3, No. 5, and No. 6 singles. They also claimed two wins in No. 2 and No. 3 doubles.

“In all honesty,” Mauthe said, “We were taking out our anger about the loss the day before. We had been a hair away from winning, we figured we’d get it done that day.”

As a senior, Mauthe’s remaining matches with the Blugolds are numbered. He said he felt as though he couldn’t afford to give less than all he had, despite having clinched his match.

Mauthe wasn’t the only player making the most of his time on the court, though.

“We have a lot of players who can play up in the lineup,” Coach Biernat said. “And now that we have some strong seniors graduating, I’ve started bringing up some players who have never gotten the chance to play one before. This way, they get a sense of what that pressure is like.”

“That was probably one of the best matches he’s played all season,” Biernat said. “He went against a highly ranked UTR player with a high winning record and took him toe-to-toe.”

The rest of the season

The Blugolds’ last match is scheduled for May 1 against the University of Chicago — a team ranked nationally in the top ten.

Both the men’s and women’s tennis teams are scheduled to play and will both be making the trek to Chicago.

“I think the trip will cap off the season well,” Coach Biernat said. “We’ll also get to go against a team that will likely kick our butts.”

Mauthe said his biggest focus this season was the direction of the team after he’s gone.

“My brother, who played here too, told me you get from this team as much as you give to it. I was told that when I joined this program, and I’ll be saying that as I leave it,” Mauthe said.

Both Mauthe and Coach Bierant said they have high hopes for the team. With hard work and determination, they believe they can go far in the coming seasons.

“The answer to winning is within our team,” Grant Mauthe said. “The only question remaining is who will step up?”