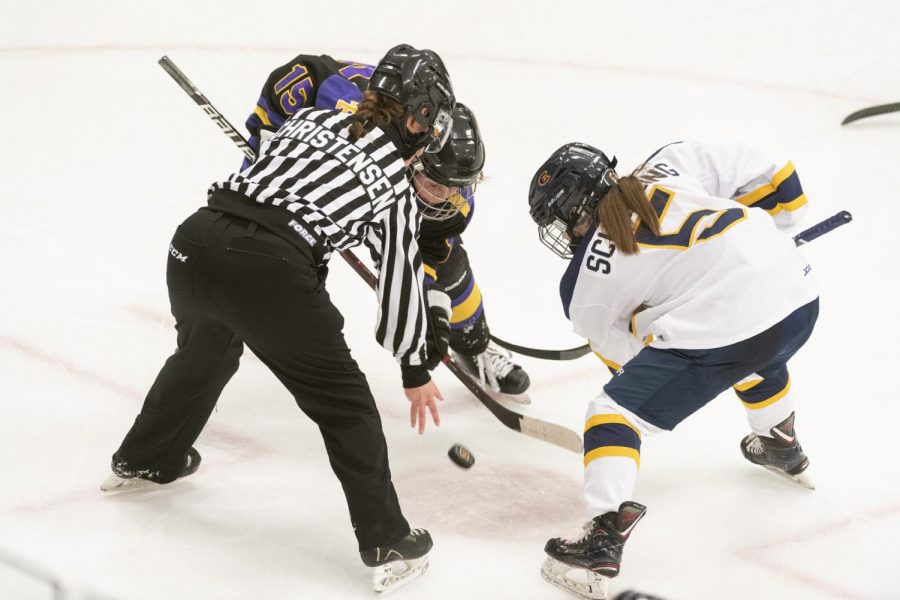 The UW-Eau Claire women’s hockey team is now 6-1-1 after taking their first loss of the season to UW-River Falls on March 5.

The Blugolds played their first game against the Falcons in River Falls on Wednesday, March 3.

The Falcons scored first in the first period and were not followed up until the middle of the second period when Taylar Meier, a first year-forward and defenseman, scored for the Blugolds.

Meier was assisted by Emily Hart, a second-year defense and Hattie Verstegen, a first-year forward. This brought the game to a tie.

“I think that definitely brought the momentum to the team,” Meier said. “We thought, ‘Now we’re in the game.’”

In the first minute of the third period, the Blugolds took the lead with a goal from Emma Peterson, a fourth-year forward. At 10 minutes, Verstegen scored the final goal of the game, leaving the final score at 3-1.

On Friday, the Blugolds hosted the Falcons and lost 5-1. The Falcons scored three goals in the first period and were left unanswered by the Blugolds.

In the second period, Meier scored the Blugolds’ only goal of the night with an assist from Eden Gruber, a first-year forward and first-year defenseman Sydney Johnson.

“I truly thought there was a chance of coming back, however there was a 3-1 deficit which is hard to come back from,” Meier said.

The Falcons scored another goal 10 minutes later in the second period, and picked up another off a power play at the end of the third period.

The Blugolds only took 15 shots to the Falcon’s 37. Kylah Krause, a second-year goalie, saved 32 out of 37 shots on goal.

“This was the first time we have had any adversity all season,” Strand said.

Strand said what makes it so hard to come back from a 3-1 deficit is ultimately human nature.

Instead of “digging in” and “clawing their way back,” athletes will often think more about wanting to escape that moment, Strand said.

Strand said the team has never experienced having so many younger players and with the success of this season, you never know how they are going to respond to adversity.

Strand said from what he saw on Friday, he found their reaction to be “very encouraging.”

“They never quit,” Strand said. “The energy on the bench was very strong.”

The Blugolds received a bye for the first round of the Wisconsin Intercollegiate Athletic Conference tournament and will be hosting a semifinal game on March 10 against UW-Superior.