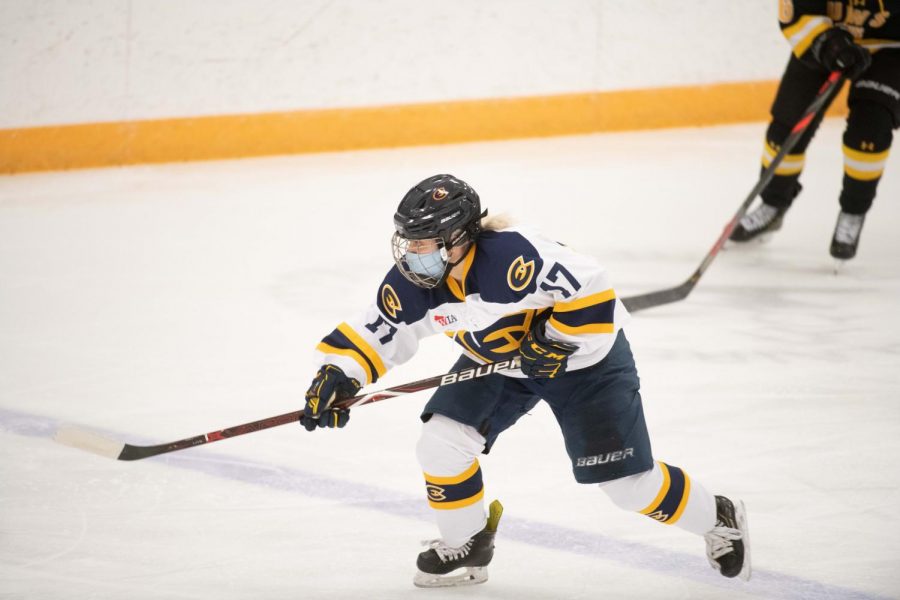 For the first of two matchups, the Blugolds traveled to Superior to face the UW-Superior Yellowjackets on Feb. 24.

Erik Strand, the UW-Eau Claire head coach, said the team’s plan for the matchup was to play their systems, try to have a lot of energy and make the Yellowjackets play at their pace.

Each facility has its differences and Strand said there is a lot more space behind the nets at Superior and the glass is much higher, keeping pucks in that would normally go out during a play.

The Blugolds had 41 shots on goal and scored twice to win 2-1.

Forward, Addie Young — facing off against her hometown — made the first goal and Morgan Zirbel, defense, made the second for her first goal of the year.

For the second matchup of the week, UW-Superior traveled to the Hobbs Ice Arena to face the Blugolds on Feb. 26.

They wanted to contour what they were doing, said Strand.

The team prepared for their second face-off against Superior by creating some extra offense, Strand said, which worked to their advantage because they were able to score an extra goal — totalling three.

The Blugolds had 33 shots on goal in this matchup.

Stephanie Martin, a third-year goalie, didn’t play Wednesday. She said this gave her the opportunity to watch the ice and pick out players on the opposing team who stood out.

Martin played brilliantly in the second game, Strand said. She stopped all 15 shots she faced in her second win of the season.

“I just want to play my best, play confident and calm, make the saves I have to, help my team win, but also enjoy the little moments because the season is so precious,” Martin said.

Each week is a rivalry week in the WIAC, and the Blugolds face off against the UW-River Falls Falcons this week.

“You look at River and the history they have with that program, they’re still the top dog and we’re trying to become that and we have a long way to go,” said Strand. “We have a lot of work to do in a couple days.”

However, the team is feeling excited about facing off against UW-River Falls this week, Martin said. He said beating them would be the biggest goal this season.

“I think we’re peaking at the right time,” Martin said.

The team faces off against UW-River Falls in another two-games series on March 3 and 5.

Martin said the team is in its prime and feeling confident.

The Blugolds travel to River Falls on Wednesday and face the Falcons again on Friday at home.