Blugolds secure their 10th and 11th wins of the season 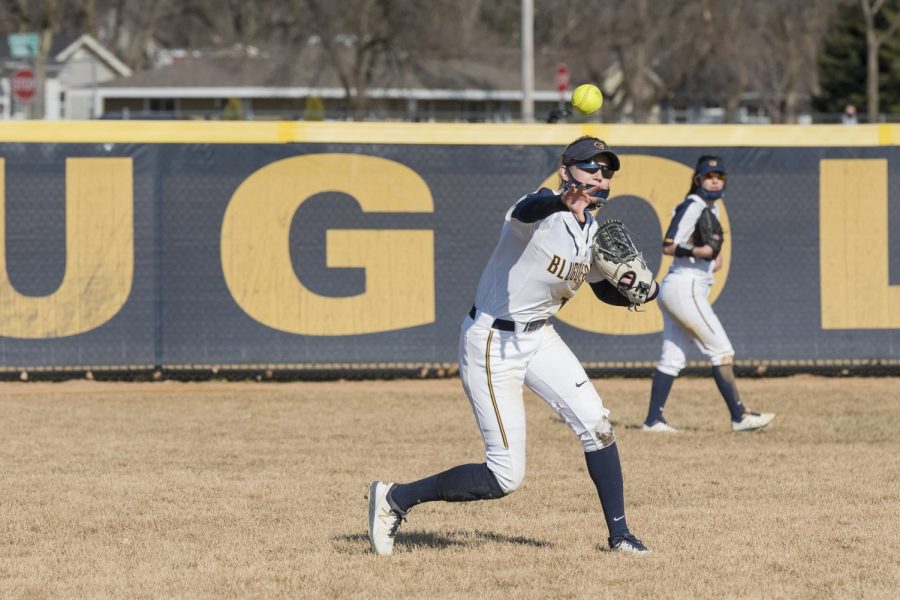 UW-Eau Claire travelled to Decorah, Iowa to play a doubleheader against Luther College.

The Blugolds traveled to Saint Paul, Minnesota to play a doubleheader against the St. Thomas Tommies on March 22.

Then, they went back on the road March 25, traveling to Decorah, Iowa to play a doubleheader against Luther College.

The Blugolds earned a split, defeating the Tommies 6-0 in game one — securing their tenth win of the season — but falling by a score of 7-0 in game two.

Huntington spoke highly of Sivak’s abilities, saying she can strike people out and keep hitters off balance.

“She doesn’t panic when some runners get on base and has been a great leader for us,” Huntington said.

Huntington said Sivak threw the best game she’s seen her throw of her career and she pitched like a senior and like a leader. She said Sivak has become a very mature and composed hitter.

Game one against Luther

The Blugolds started the fifth inning falling behind to Luther 7-0.

But then, a double from Sadie Erickson, a second-year pitcher, scored Shaelyn Talley, a second-year outfielder. Erickson then would go on to score on the next at-bat.

A single from Katelyn Yute, a fourth-year infielder and outfielder, opened the offense in the sixth. Yute advanced to third off of a double from Megan Maruna, a second-year outfielder and infielder, and then scored off a Luther error — making it 8-3.

In the final inning, the Blugolds got a pair of hits from Abbey Place, a fourth-year catcher and infielder, and Maria Back, a third-year infielder, but were unable to add any runs.

Emotionally, mentally and physically, it’s hard to come back after a loss and win in game two, Huntington said — however, the Blugolds managed to do just that.

“We made a change based on an injury and then, it’s about the pride in not getting swept in a doubleheader,” Huntington said.

“We’ll come together, we’ll talk, everyone will share their input, we all kind of talk about what we can do better, what we lacked that game and after that it’s really just about letting it go,” Sivak said.

In game two, the Blugolds struck first — scoring four runs in the third. Again, Erickson kicked off the hitting in the inning with a single, and she later scored off a back double.

In the half-inning, the Blugolds had five hits and would add two runs a piece in the fourth and fifth innings.

A two-run homer from Place kicked things off in the fourth, while a run batted in single from Mikayla McEnergy, a fourth-year outfielder, opened things up in the fifth.

The offense finished with 13 hits with Erickson and Maruna leading the team with three each. On the mound, Madi Zerr, a second-year pitcher and umpire, pitched the entire seven innings and earned the win.

The Blugolds were given their first weekend off of the season before their Wisconsin Intercollegiate Athletic Conference opener against UW-Stout April 8.

“This week getting back to practice, these practice days are going to be super key,” Sivak said, “Making sure we’re ready for all the competition we know is coming with conference.”

The much-needed break will help to heal bodies because there have been a lot of injuries this season, Sivak said.

Sivak said she used the break to visit a graduate school, but some of the other girls on the team went home to visit their families.

“After this little bit of a break, I expect us to start firing on all cylinders,” Huntington said.