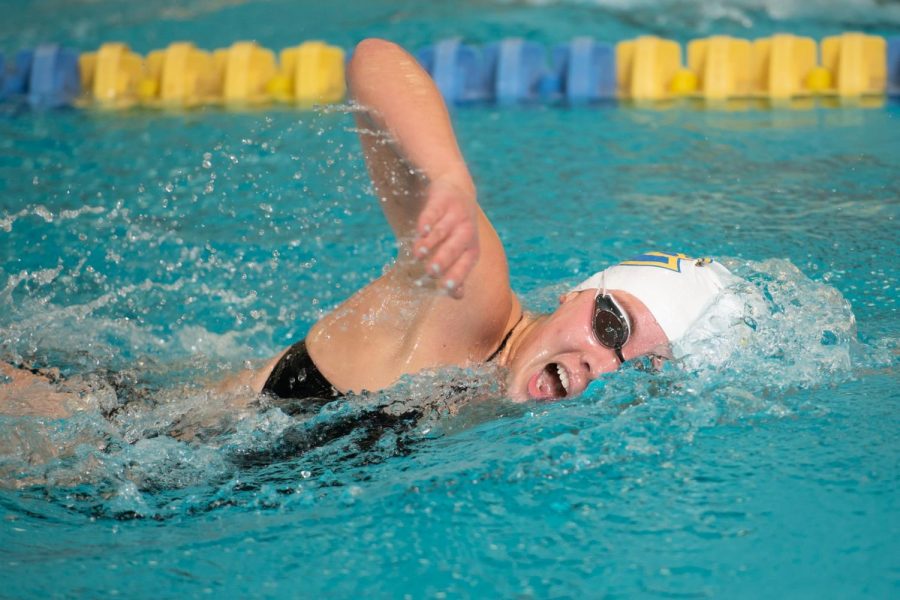 The Blugolds travelled to UW-Stevens Point for their final dual meet of the season.

The UW-Eau Claire men’s and women’s swim and dive teams broke six records in their final meet of the season.

Anne Ryder, UW-Eau Claire’s head coach, said the team was extra motivated to compete in this final duel meet since all championship meets were cancelled this season.

Jessica Wilson, a fourth-year swimmer, posted a pool record in the 200-yard backstroke for the women’s team.

Michael Bylander, a third-year swimmer, was responsible for three of the individual men’s records and was part of the 400-yard medley relay record as well.

Kabe and Kocher, along with Ben Koller, a first-year swimmer, both received All-American consideration scores on the one meter as well.

Sarah Dahlk, a third-year swimmer, received All-American consideration scores on one meter for the women’s team.

Ryder said the team’s mentality they maintained throughout the season allowed them to end their season with this great performance as a team.

“It was the intensity and the energy that the team brought this whole season that set them up,” Ryder said.

Riley Jorgenson, a fourth-year swimmer and the captain of the swim and dive team, said the team has been able to keep up the intensity in practices all season despite restrictions due to COVID-19.

“I feel rewarded after finishing a hard practice,” Jorgenson said.

Jorgenson said the team did a great job of motivating each other and staying positive throughout the season, and was able to bond even further once they were able to start travelling to meets together.

The team began practicing at the end of September, but was not able to compete in their first meet until February.

Ryder reiterated Jorgenson’s point about the team being able to stay focused and not slack off during this long season, saying it was “full-steam ahead” once they got the green-light to start competing again.

“The team in the beginning kind of got on board with what we were trying to do,” Ryder said.

Ryder said she was proud to see the team end their unusual season on such a high note.

“It’s really enjoyable for me to watch everybody swim to their potential,” Ryder said. “That’s always our goal.”