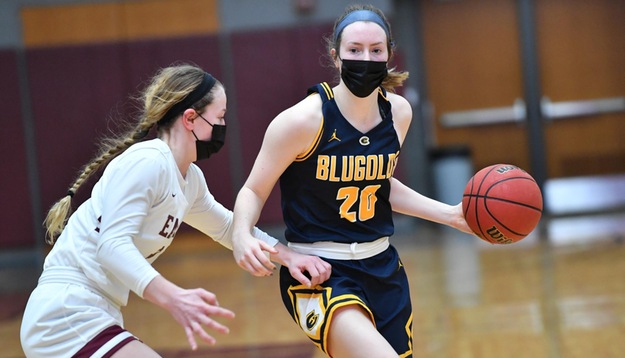 After endless days of practice and anticipation, the UW-Eau Claire women’s basketball team was able to suit up and play some games for the first time this season. Both games were played against UW-La Crosse on Feb. 3 and 5 and the Blugolds were able to start the season 2-0.

In their first matchup the Blugolds came out strong, dropping 23 points in the first quarter and adding an additional 18 points by the end of the second.

Coming out after the half with a 17 point lead, the Blugolds expanded their lead with a 26-point third quarter. However, they slowed down in the fourth only scoring nine points in the final quarter.

The final score left UW-La Crosse in an 18-point deficit as the Blugolds defeated their opponent 76-58.

The leading scorer for the Blugolds was Katie Essen, a fourth-year center, with 18 points. She was followed closely by Maizie Deihl, a fourth-year point guard, who finished the game with 17 points.

Away vs. UW-La Crosse

Going into the second match the Blugolds continued to score as they took their second game against UW-La Crosse with a 64-48 win, putting them 2-0 for the overall season.

Leading in scoring for the Blugolds was Jessie Ruden, a second-year point guard, who scored 22 points.

Ruden commented on her ability to play and score the way she did during the game.

“A lot of the help comes from the team; they definitely instill confidence in me and find the open person,” Ruden said. “Also, the coaching staff did a good job in giving me confidence and helping me prepare for games.”

Ruden came in as a freshman last year playing for the Blugolds and came back sophomore year to compete. Coach Englund spoke about Ruden post-game and the kind of player she is.

“When I recruited Jessie this is what we thought, this is what we wanted,” Englund said “This was the plan, was that she was able to play as a freshman and as a sophomore be one of the best players in the league.”

The UW-Eau Claire Women’s basketball team is scheduled to return to the court with a home game at 7 p.m. on Wednesday, Feb. 10 against UW-Stout.

On Wednesday Feb. 3, the NCAA made the decision to cancel the Division III winter championships based on the number of schools not participating in sports this year.

NCAA Chair of the Presidents Council, Faynesse Miller put out the following statement:

“Today, we made the difficult decision to cancel our Division III winter championships,” Miller said. “While some institutions have been able to safely return to sport, the recent declaration form data show that more than half of our division has not returned to winter sport practice and competition to be in a position for NCAA national championship participation.”

“This was a gut-punch today,” Schumacher said. “We just don’t have enough teams and it’s a technicality based on percentages. You have to reach a certain percent participation rate for universities participating in the tournament and we just couldn’t get there. This is the second year in a row these student-athletes have had their championships cancelled and it’s heartbreaking.”

WIAC teams will continue playing their scheduled regular season games, but no further games will be played this year outside of conference play.

Huettner can be contacted at [email protected]