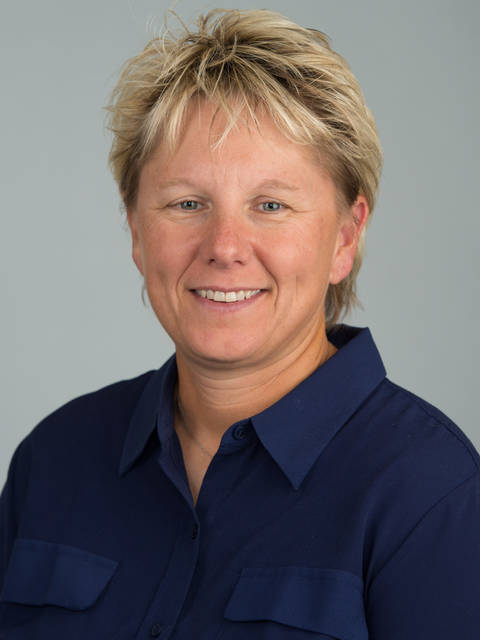 UW-Eau Claire’s very own Leslie Huntington was recently announced as one of the 2021 inductees for The National Fastpitch Coaches Association.

Huntington is entering her twentieth season in 2020-2021 as UW-Eau Claire’s head softball coach.

Huntington said it’s hard to reflect on a 20-year long career while also keeping it short. Huntington said it came down to four things: being willing to get out of her comfort zone, having a strong network, knowing the right people and working her butt off.

“I live, eat, breathe and sleep the sport,” Huntington said.

Huntington said her love for the sport goes all the way back to when she was a child. She was always outspoken and loved telling others what to do so she knew coaching was the right fit for her.

Team sports are a microcosm for life, Huntington said. She considers herself lucky to get paid for what she truly loves to do.

Huntington said she tells her players that softball isn’t who you are — it’s what you do. But for Huntington, softball is who she is.

Erikson said Huntington’s acronym WIN helps her focus on what is happening in the moment instead of worrying about things she can’t control.

Erikson said Huntington helped her grow into a player she didn’t know she could be.

“Coach Huntington is very intense, but it shows how much she loves the game,” said Erikson.

Huntington said even as a little girl she was bossy, outspoken and liked being the one to call  the shots.

Huntington graduated from Buena Vista University with a degree in athletic training, and she dreamed of working with college athletes as an athletic trainer.

Not long after college, she worked at a sports medicine clinic in Des Moines, IA for two years.

From there, she became head athletic trainer at Simpson College in Indianola, IA, as well as assistant women’s basketball and softball coach.

While at Simpson College, Huntington earned her master’s degree in sports administration from Iowa State University.

“In the two years I wasn’t coaching softball, I realized that was my true calling,” Huntington said.

Huntington went on to say success does not come without being passionate about what you are doing and those you lead.

After her time at Simpson College, Huntington found a head coach position at UW-Eau Claire.

All the coaches that Huntington looked up to are the ones who helped her reach the position she is in today.

While she wants to win another national championship and win as many games as possible, she also wants her players to soak up the experience, graduate, win a lot and come back as an alumn.

“There’s nothing better than reminiscing with our alums,” Huntington said.

“Now that I get to work with her, I get to discuss what is important for the team and how we can grow as a program and help guide the team to victory,” Wilczynski said.

While she was playing, Wilczynski admired the fact that Huntington tried to be fair to everyone and give all players a chance to get on the field.

Huntington said being announced as one of the two inductees for the NFCA Hall of Fame was overwhelming and emotional.

“For all that she has done for the program and all the lives she has positively impacted, she deserves to be in the Hall of Fame,” Wilczynski said. “Her commitment to the physical and mental game goes beyond any coach I have ever known.”

Huntington said the announcement was especially emotional for her because she had lost her dad on the first day of practice during the 2019 season.

“He would have been so incredibly proud. He was my harshest critic, but was equally my biggest fan,” Huntington said.

She said she could imagine him running around in heaven telling everyone who would listen.

Huntington said she never set out to get inducted into the NFCA, but she knew someday it was going to happen. She said she still can’t believe she is in the same company as so many big names in her sport.

She will be inducted next December with her dad by her side in spirit.

“Victories on the field obviously help someone get to the Hall of Fame, but the small victories also are what makes a great coach,” Wilczynski said.