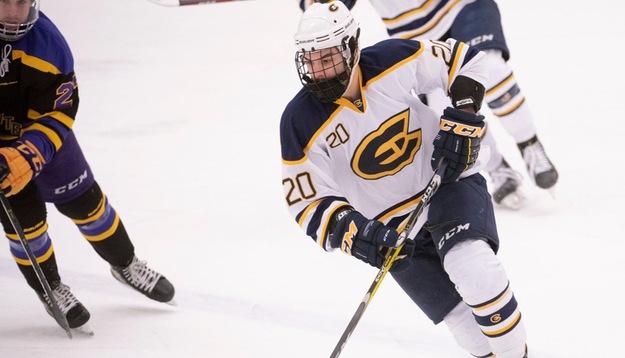 The UW-Eau Claire men’s hockey team won both their games against UW-Stout last week, bringing their season record to 4-1 and making this a season fans won’t want to miss.

Fifteen Blugolds on the scoresheet

For the first of two matchups, UW-Stout traveled to the Hobbs Ice Center to face the Blugolds on Feb. 17.

Nick Techel opened the scoresheet with a powerplay goal from the slot, and the Blugolds scored an additional two goals within the first six minutes of the game.

The team finished the first period with five goals and went on to score three more in the second period — one, another power play — scoring on two of their three chances.

Matt Loen, the head coach, said this was the highlight of the game for him, since their power play has been struggling lately.

The team scored their final two goals of the game in the third period, totalling 43 shots at the goal, winning the game 10-2 and putting 15 Blugolds on the scoresheet.

“That’s our philosophy here: we don’t want to have a top six, bottom six situation, we want everyone to have the ability to play,” Loen said.

Loen accredits their strength as a team to this density and said it was a fun game to coach.

It is very unlikely to score 10 goals in a game especially in this conference, said Zach Dyment, a fourth-year goaltender.

“Every single goalie on every team is incredibly good and every team plays a good defensive structure,” said Dyment.

Dyment said it was great to see the guys capitalizing on all their opportunities to score and to have the offense and defense clicking.

Dyment blocked 16 of the 18 shots he faced and a new addition to the program, Ryan Green, a first-year forward, was credited with four assists.

Loen spoke highly of Green’s abilities after Wednesday night’s game, saying he’s fast, skilled, has great hockey sense and composure at the puck and called him a great addition to their program.

For the second matchup of the week, the Blugolds traveled to Menomonie to face the UW-Stout Blue Devils on Feb. 19.

Loen said there are always challenges when traveling.

Stout’s ice surface is smaller, the ice is colder and faster and the lighting is different, said Loen.

Loen said the team prepared for their second face-off against Stout by practicing with the lights dimmed and — other than cleaning up a few, minor things — the team’s game plan was to do what they did Wednesday night.

Using this tactic, the team totaled 22 shots at the goal and won the game 4-2.

Dyment also kept up his momentum, blocking 15 of the 17 shots Stout attempted.

The team hopes to keep building on their season this week when they face off against Northland College, says Loen.

While the first of two matches against the team was cancelled, the second is still set to be held home at Hobbs Ice Arena at 7:30 p.m. Feb. 26.