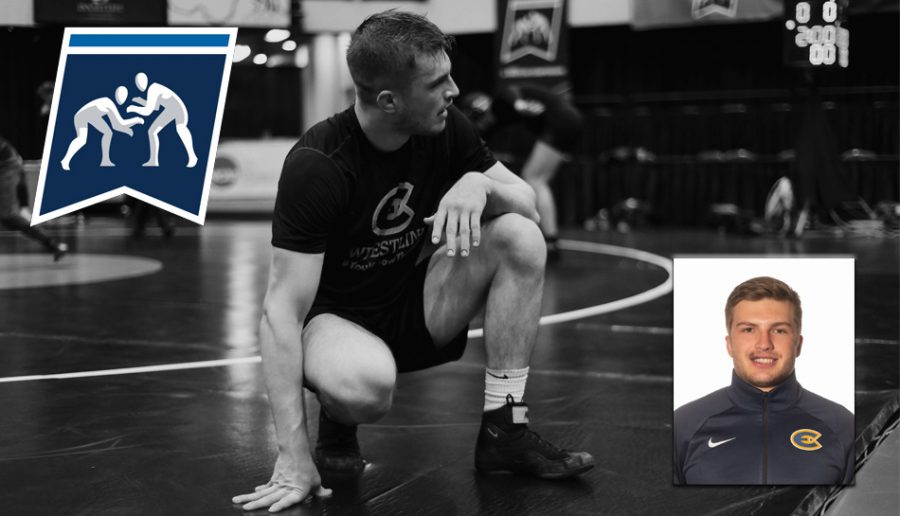 Lawrence finished eighth in the nation with 19 falls with a total time of 37.50

On March 24, the NCAA announced the wrestling award winners and state leaders of each division.

Evan Lawrence, a third-year wrestler, made it into the top ten in fall totals and placed eighth in the nation. He competed at 174 pounds and finished with 19 falls with a total time of 37.50.

Lawrence said he was not surprised when placed in the top ten.

“I was sort of watching that ranking during the year and I knew if I just kept doing what I do I would end up in that position,” Lawrence said.

Tim Fader, the head coach of the wrestling team, said he was expecting Lawrence to place in the top ten because he was always good at pinning people. Lawrence had 17 pins his freshman year, which is a great number, Fader said.

Elroy Perkin, the head assistant coach for the team, echoed these statements.

Perkin has known Lawrence since he was in high school and recruited him to the team. He has been getting better ever since then, Perkin said.

Perkin said Lawrence took a step back last year because of his shoulder surgery, but it has been exciting to see him back at it this season.

Lawrence qualified for the NCAA Championships after finishing in third place at the Upper Midwest Regional tournament.

At the WIAC Championships, he was the runner-up at 174 pounds. Lawrence finished his 2020 season with a record of 30-6.

Lawrence said he was very satisfied with his overall performance this season compared to last season, where his season ended short due to shoulder surgery.

“I trained harder than ever before and truly believed in myself that I could accomplish anything this year,” Lawrence said.

Lawrence was one of four members of the team awarded with individual Scholar All-American honors.

The individual Scholar All-Americans must have at least a 3.2 GPA and meet one of the following wrestling criteria:

Fader said the award was fitting for him as he was great at pinning people and had a great season, having no injuries and a healthy season.

Lawrence said he was also very proud of his team for always thinking about what made the team better as a whole, not just themselves.

“Everyone knew their role on the team and that was a key part of why we did what we did and we are only going to get better,” Lawrence said.

The Blugolds earned a team grade point average of 3.44, ranking them 25th in the nation which is their first time placing in the top 25 out of the 109 NCAA Division III wrestling programs in the country.

On Mar. 12, The NCAA announced the cancellation of the remaining winter and spring sports.

“He was very upset and there was nothing we could do about it,” Perkin said. “After punching the wall, we hugged and cried.”

Fader said the cancellation was heartbreaking and the team felt hurt for Lawrence as he could no longer compete at the tournament.

“As disappointing as it was, this will put things into perspective and the next time they get on the mat they’ll do better,” Fader said

Even with COVID-19 cutting the season short, Lawrence still finds time to train, weight lift and work on conditioning in his family’s basement.