Blugolds win one and lose one in season opener 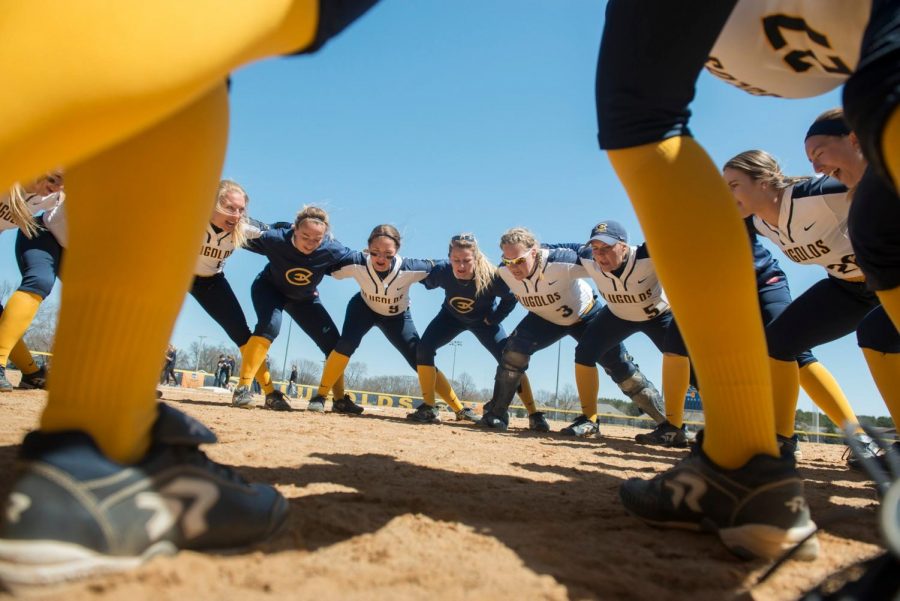 After a 9-1 loss to Central College, they rallied, defeating Gustavus Adolphus 4-3, bringing the Blugolds’ record to 1-1.

The women’s softball team kicked off their season with two games over the previous weekend.

After a 9-1 loss to Central College, they rallied, defeating Gustavus Adolphus 4-3, bringing the Blugolds’ record to 1-1.

The games were played at 6 p.m. and 8 p.m. on Saturday, Feb. 29 in the Rochester Community and Technical College dome.

Game one — against Central College — began with the Dutch scoring once in each of the first two innings.

The next two innings went scoreless, then two more Dutch runs were tallied before the Blugolds got their first and only run in the fifth inning.

The sixth inning concluded the game after a five-run inning for the Dutch.

Their second and final game of the night began similarly, with a different end result.

Gustavus scored twice in the first inning, then the Blugolds answered with two runs in the top of the fourth. Gustavus came back with a run in the bottom of the fourth, but the Blugolds intercepted their lead with a two-run play in the fifth inning.

Leslie Huntington, head coach, said she was impressed by the team’s turnaround from the first to the second game.

“Morgan Sivak’s (third-year pitcher) improvement from the first to the second game was one of the highlights,” Huntington said. “She threw really well overall, but cut down on her walks against Gustavus.”

Huntington also said the team’s attitude in both games was a highlight for her. She said their grit, confidence and positivity, even in with a big deficit against them, impressed her.

According to Julia Counard, the Blugolds’ third-year pitcher, their defense’s aggression, the team’s pitching and the runners’ hustle were some of the highlights of the weekend.

“Our defense was not afraid to lay out for hard-hit balls and did a great job keeping the ball in the infield,” Counard said.

Counard also said, after the weekend, she noticed several areas she feels the team should improve.

These areas include controlling the pace of the game, taking advantage of situations with runners on base and beginning to score earlier in the game.

Looking forward, Huntington said the team is not as goal-orientated, as they are focused on improving each and every day.

Counard also spoke of the team’s focus on the present rather than the future.

“Winning a national championship is always a goal, but this year our biggest goal is to trust the process and take each day as it comes,” Counard said. “We aren’t playing with the end in mind, we’re playing with ‘this game’ in mind.”

Huntington said that, due to this team mentality, she does not find any games to stand out as overly important, other than whatever their next game is.

Counard and Abigail Place, third-year catcher, said they are very much looking forward to their spring break trip in Florida, where they will play 12 games against various teams.

Place and Counard also expressed their excitement for the beginning of their conference schedule.

“We would absolutely love to have fans come to support us at home on April 4 and 5,” Counard said. “That’s the opening weekend of our conference.”

The Blugolds continue their season this weekend with 4 p.m. and 6 p.m. games on Saturday and 8 a.m. and 12 p.m. games on Sunday at RCTC.Johnson can be reached at [email protected].