Blugolds go out in the second round of NCAA tournament 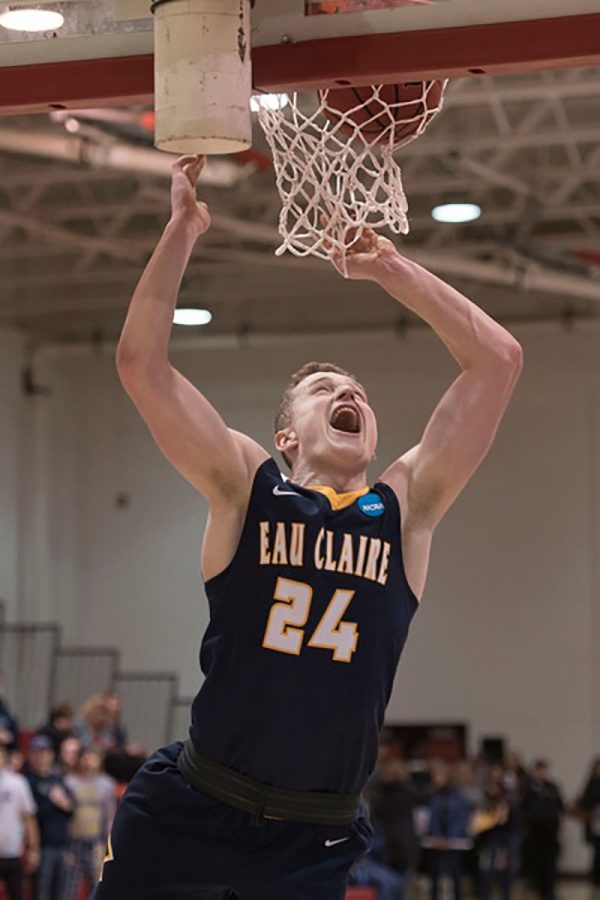 The Blugolds men’s basketball program finished their season after a loss in the second round of the NCAA tournament. The team ended with a 20-10 record on the season.

At 5 p.m. on Friday at Saint John’s University in Collegeville, Minn., the Blugolds defeated Whitman College 78-61.

The team advanced to their second round. At 7 p.m. the same day the Blugolds lost 69-78 against Saint John’s University.

This season’s appearance in the NCAA tournament was the first since 2001, when the men’s basketball team made it to the second round, before a loss against the University of Chicago.

The Friday game began and ended with the Blugolds ahead. Carter Brooks, third-year forward, initiated the scoring 45 seconds into the game.

In addition to Whitman tying the score at five to five early in the game, the Blugolds held onto the lead for the entirety of the game.

Whitman had a 20-7 record going into the game. The Blugolds tallied Whitman’s eighth and final loss of the season.

Matt Siverling, head coach, said he was proud of the overall team performance.

According to Siverling, Whitman’s playstyle was fast-paced, which the Blugolds have not experienced very much this season.

“I’m really happy with how the guys came out,” Siverling said. “I wasn’t sure how we were going to react in a situation we haven’t been in in the past.”

The Saturday game against Saint John’s was the Blugolds’ final game of the season.

The first half of the game was a back and forth battle, with neither team holding onto the lead for long. At halftime, the Blugolds were ahead 37-35.

Once the second half began, Saint John’s took hold of the lead and maintained it for the rest of the game.

The Blugolds were able to keep the game within single digits, but were unable to regain the lead. UW-Eau Claire concluded their season with a nine-point loss.

Saint John’s is currently 27-2 on the season, with two losses against Nebraska Wesleyan and Saint Thomas.

According to the NCAA, Saint John’s was ranked No. 3 at the conclusion of the regular season.

The Johnnies face off against Saint Thomas in the Sweet Sixteen. The game will be at 6 p.m. on March 14 at Saint John’s.

With the men’s basketball season complete, the team will lose five fourth-year players.

Cole Rabedeaux is the Blugolds’ fourth-year guard. According to Rabedeaux, as a sophomore, he transferred to UW-Eau Claire from Peninsula College in Washington and has played on the men’s basketball team since then.

Rabedeaux started in every game this season and led the team in scoring in Friday’s game with 20 points, as well as throughout the season. He averaged 19.3 points-per-game on the year.

With his collegiate basketball career coming to a close, Rabedeaux spoke on his time as a Blugold.

“I couldn’t be happier with playing my college basketball career at UW-Eau Claire,” Rabedeaux said. “If I could go back, I would have come here my freshman year.”Johnson can be reached at [email protected].