Women’s basketball player Hallee Hoeppner was recognized for her participation in athletics, high academics and her involvement with the community 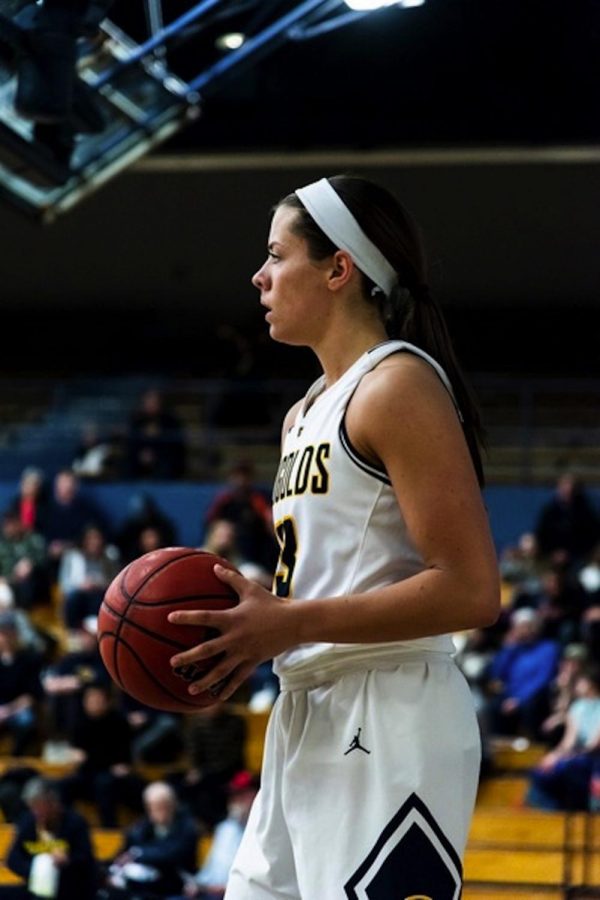 Hallee Hoeppner's growth within the basketball program has been evident and that growth has been noticeable in other areas of her life, Englund said.

Hallee Hoeppner, a fourth-year, wrapped up her final season on the UW-Eau Claire women’s basketball team as a finalist for the 2020 Jostens Trophy award.

According to an article posted on Blugolds.com, the Jostens Trophy is awarded to outstanding NCAA Division III men’s and women’s basketball players who excel on the court, in the classroom and in their communities.

The article stated that this season marks the 23rd presentation of the awards, with the inaugural trophies bestowed in 1998.

“What I appreciate about the Division lll award, is that it not only recognizes basketball ability but also recognizes high academics and your commitment to your community,” Englund said. “So it’s a really special and unique award and it’s very prestigious.”

Englund said Hoeppner has excelled in every area that the award recognizes.

“She is a true triple threat,” Englund said. “She has exceeded expectations within the basketball program but also has been such a tremendous role model to the little girls at our camps and who come to our games who want to be like her one day.”

Hoeppner said her love for the game has grown since being at UW-Eau Claire.

Hoeppner’s growth within the basketball program has been evident and that growth has been noticeable in other areas of her life, Englund said.

Englund went on to say that Hoeppner is an example of what the award means and it is a tremendous honor that she is recognized.

Hoeppner said she has always felt an incredible amount of support behind her while at UW-Eau Claire. She said her teammates have helped her with her confidence and her coach has pushed her to become better in many ways.

“My teammates have given me confidence as a leader, which has helped me become more comfortable being vocal,” Hoeppner said. “My coach has challenged me to become a better basketball player, student and person. She has taught me more about life skills than I could’ve ever imagined.”

The women’s basketball team is committed and active in many different ways to serving its community, Englund said.

She said Hoeppner has been involved with UW-Eau Claire’s girls basketball camps, the Blugold Buddies program, community service events the team has done involving the Boys and Girls Club, the Epilepsy walk and the Eau Claire Marathon.

“Hallee has been a significant part of all the things that we do to give back,” Englund said. “We believe that the community in Eau Claire does so much to support our team, that it’s our way of giving back to them.”

Hoeppner, who is a communications sciences and disorders student, said  her professors have provided her with insights into the world of Speech-Language Pathology and through their classes, a clinical practicum and many volunteer experiences, she feels prepared to take on graduate school next fall.

“My professors and members of the community have given me tons of encouragement throughout the last four years and it was awesome to be able to play for a university and city with so much support,” Hoeppner said.

Developing organizational and time management skills have helped her balance her athletics, school, work and community service, Hoeppner said. She said she hopes they help her in graduate school and working as a speech-language pathologist.

“Basketball has taught me how to stay organized, manage time, pay attention to detail and communicate and collaborate, which are all valuable skills that I hope to transfer over to my next steps in life,” Hoeppner said.

The UW-Eau Claire’s women’s basketball team faced many injuries during Hoeppner’s third year at the university, Englund said. She said Hoeppner became their go to player and during that season is where she really blossomed.

Hoeppner said her third year was very different and difficult on a lot of her teammates because of those injuries.

“Although you never like to see a teammate endure an injury, I believe that that season really pushed me outside of my comfort zone as a player and allowed me to see what I was capable of doing,” Hoeppner said.

Her teammates were very helpful and supportive, Hoeppner said, even from the sidelines when they were injured.

“I wouldn’t have been successful without their advice on how to improve or without my teammates who were on the court with me because they set me up for success by playing well themselves,” Hoeppner said.

Englund said Hoeppner has always been willing to do what’s best for the team, especially when they faced difficult times.

Hoeppner said her friendship with her teammates and the mutual support has been a valuable part of her time at UW-Eau Claire.

“Not only have I had the opportunity to compete with teammates who support one another and play for a program that wants to win, but I’ve also found my best friends on the team as well,” Hoeppner said. “Basketball has been one of my favorite parts of the college experience.”

VanDenMeerendonk can be reached at [email protected]