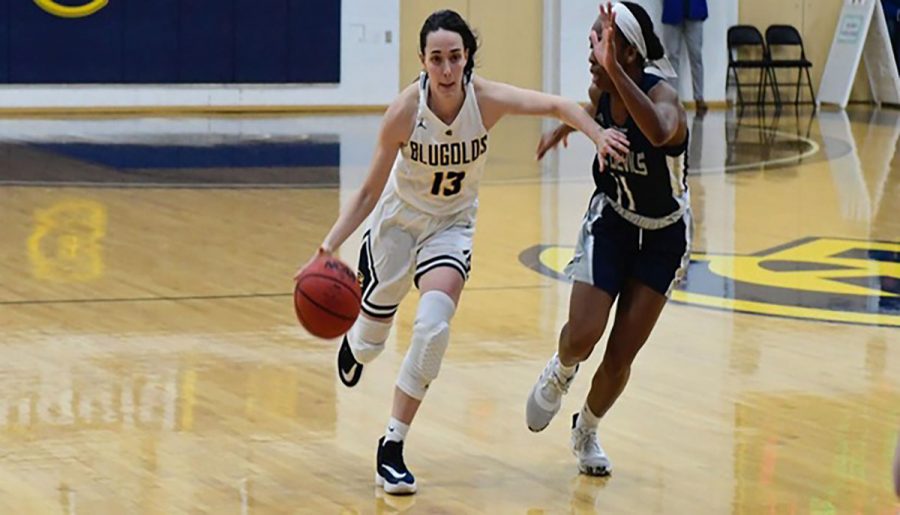 Being competitive and maintaining a winning mindset contributes to the success of the Blugolds basketball team.

The UW-Eau Claire women’s basketball team had their third win of the week against UW-Stevens Point with a final score of 72-69. The Blugolds had a lead from the start as they opened the game with a 20 point advantage.

The first half of the game went well for the Blugolds as they finished up 44-23. Katelyn Morgan, a third-year point guard, said sticking to the game plan really helped them perform well.

“The first half we played the game plan really well,” Morgan said. “We were executing it and making the extra passes and everything was going really well.”

As the second half came, UW-Stevens Point started to make a comeback, but the Blugolds kept pushing through. Katie Essen, a third-year center, said maintaining focus is important for success.

“The second half wasn’t our better half of that game. We kind of let up a little bit in our defense,” Essen said. “We kept pushing and we took that as a learning lesson that we can’t let up on teams and when we get leads we have to keep them throughout the whole game.”

This third win of the week came after a lot of preparation and practicing. Essen said the team knew they were in for a long week due to a makeup game on Monday, on top of their regular Wednesday and Saturday games.

“We had to make sure we stayed in good shape and took care of our bodies for the game on Saturday against Stevens Point,” Essen said.

“We have an opportunity to be first in the league, so these games are very important,” Englund said.

These opportunities lead to make a competitive team. Part of the team’s preparation includes being competitive with one another, Morgan said.

“Our team is competitive with each other in practice which ultimately benefits everyone,” Morgan said. “I know the other point guards and I push each other every single day and they’re making me better just like I’m trying to make them better.”

The team also prepares by watching films to learn their tendencies so they can control those situations on the court, Morgan said.

Not only is preparing on the court important to the team, but having the correct mindset help the team win games, Essen said.

“We all just have to make sure that the day before and the day of the game that we’re in the right mindset and that we’re really ready to compete that day,” Essen said.

“When we get in game situations like that and we need to win I think we are all willing to dig down deep and really be competitive to get those wins, especially this season,” Essen said.