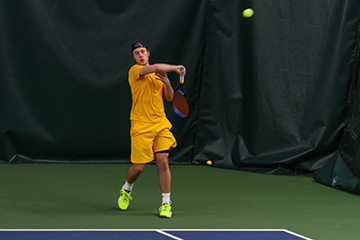 Players met at the YMCA John & Fay Menard Tennis Center for a match against the Cornell Rams.

The Blugold men’s tennis team has won all of their matches so far this season, which continued this weekend with three wins overall.

The team faced Cornell College on Saturday morning resulting in a doubleheader sweep where Demetri Bush, a first-year tennis player, won 6-1, 6-2 at No. 3 singles.

Zach Janssen, a fourth-year tennis player, said the team was very well composed in their match and showed off what they could do.

“I think we showed our guts and we showed our leadership. We were focused and we were determined to win,” Janssen said. “We wanted to show them that we can really fight toe and toe with any other highly ranked teams in our region.”

The rest of the season is going to be exciting for the team. With a competition in Texas, playing Whitewater and Gustavus Adolphus, the team has a lot to look forward to, Christensen said.

“When we go to Texas during spring break we face Kalamazoo —they are top 20 or top 15 in the nation,” Christensen said. “We have got Gustavus Adolphus, they’re a highly respected opponent —usually top 10, top 15 nationwide,” Christensen said.

The team will play UW-Whitewater toward the end of the season, which is a big rival of theirs so it is always a good match, Christensen said.

Grant Mauthe, a third-year tennis player, said a lot of conditioning goes towards preparation for these matches. The team conditions before every practice which helps them get to the next step, said Mauthe.

“One thing we are taking a bigger step in this year is in our conditioning and just taking care of our bodies by focusing on sleep and nutrition,” Mauthe said.

The team will compete in the New Jersey Athletic Conference on May 2, time and place to be determined.

“We have conferences to compete in which give us a dig to nationals if things go well,” Mauthe said.

This will be the first time in 23 seasons that the tennis team will be in a conference. Men’s tennis was discontinued from the Wisconsin Intercollegiate Athletic Conference in 1996, due to lack of funding.

Men’s tennis was recently put back into the NJAC because of new league rules.

Being in a conference will give the team a chance to compete for the conference championship and a higher opportunity of receiving a bid to nationals.

With a current seven-win streak and the NJAC approaching, the UW-Eau Claire men’s tennis team’s season has had a good start, with matches to look forward to, Christensen said.

The Blugolds will be hosting Prairie College at 10:00 a.m. on Feb. 23 at the YMCA Menard’s Tennis Center. All UW-Eau Claire students get in free with their Blugold I.D.