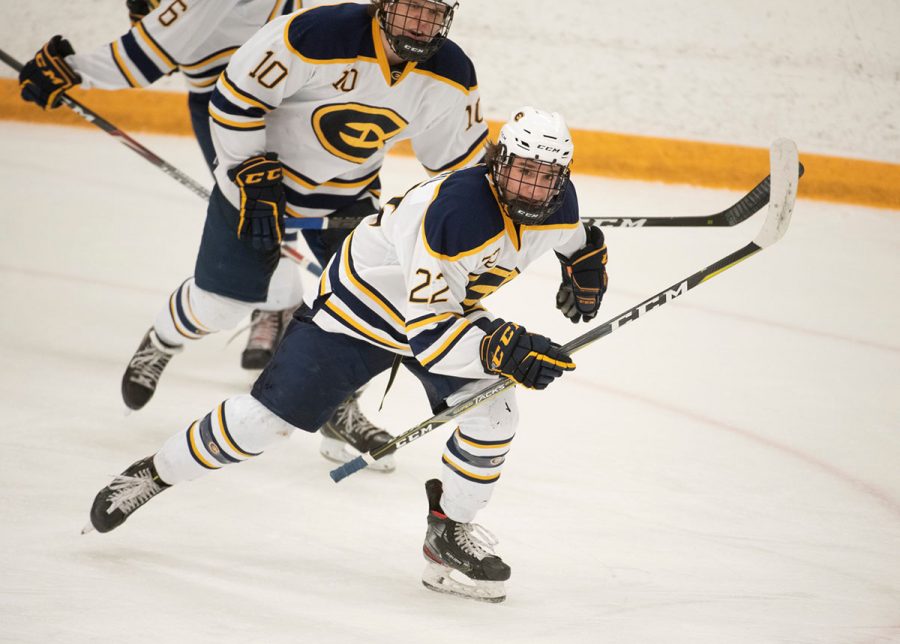 The Blugolds are currently ranked No. 1 in WIAC and No. 2 in the nation for NCAA division three men’s hockey.

The UW-Eau Claire men’s hockey team returned from Northland college this weekend with two more wins under its belt. After a 3-2 win on Friday, Feb. 7, the Blugolds defeated the 4-17-1 Jacks 6-1 on Saturday, Feb. 8 to end the weekend.

The two wins ended the teams scheduled matchups against Northland, in which the Blugolds went undefeated against them the entire season.

Matt Leon, the men’s hockey head coach, said regardless of who the team plays and how many times they play them, the goal is to “worry about what they’re doing.”

“Our game plan is always to continue doing what we’ve been doing (this season) and continue to get better at that,” Leon said.

According to Logan Von Ruden, a fourth-year defender and team captain, Anzevino played great in both games and one of the keys to the five-goal win on Saturday was figuring out how to capitalize on the shots they got.

Leon said the key to their success in the second game was wearing down Anzevino. They had a total of 78 shots in the two wins, nine of which were goals.

The first game remained within two goals throughout and for much of the second game it followed the same theme. In the third period, however, the Blugolds ran away with the game, scoring four consecutive goals to put a comeback out of reach for the Jacks.

The Blugolds played three doubleheader weekends on the road this season and have one more coming up next weekend against UW-River Falls at 7 PM on Friday, Feb. 14 and 15 in River Falls.

Playing back-to-back games in two days without being able to go home in-between isn’t something they focus on, according to Von Ruden and Leon.

“In between the two games, our main focus was resetting and preparing for the next game as if it was brand new,” Von Ruden said.

Leon said something similar — he said every line and defensive group on the team can perform at a high level.

“It is not very complicated for us,” Leon said. “We have a lot of depth, so if we just go all out in both games and control the things we can control, our work ethic will get us through it.”

In order to continue winning through the rest of the season and into the playoffs, Von Ruden said they plan on working to limit penalty minutes and build leads more quickly. Two of their last four wins have been within one goal, which Von ruden said they want to prevent going forward.

The Blugolds played River Falls once this season, which was a 2-0 win. They have a 9-2 record while on the road, with two of their three total losses being against UW-Stevens Point and Concordia-Moorehead.

The Blugolds have had an ongoing winning streak for seven games —they have lost three games all season and two games remain until the playoffs. The Blugolds are currently ranked No. 1 in WIAC and No. 2 in the nation for NCAA division three men’s hockey.