Blugolds fall to the Golden Gusties and the LaCrosse Eagles. 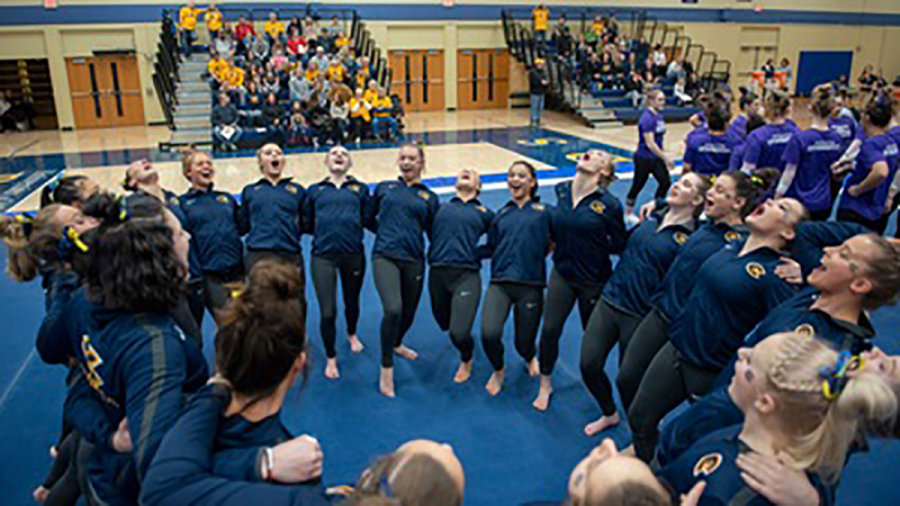 Blugolds gymnastics team motivates one another to prepare for their meets.

With the final score of 173.250, UW-Eau Claire took third place to Gustavus Adolphus College (Minn.), in second, and UW-La Crosse in first at the 9th Annual Gershon/McLellan Invitational.

The UW-Eau Claire women’s gymnastics team competed in a triangular event on  Jan. 31.

Ashley Benes, a third-year gymnast, said the team does a lot to prepare for these events.

“We like to do a lot of pressure routines, so we will all watch and cheer each other on and pretend it is a meet to put on that pressure,” Benes said.

Benes is an all-around gymnast and performed on vault with a score of 9.150, which resulted in a tie for sixth place with Brooke Merila, a second-year all-around Gustavus Adolphus College gymnast.

Ehde said to have the team come together is important for them to help motivate one another.

“We all work really hard in the gym and we all know that we are going to do this for each other and ourselves so I think that just alone helps us prepare for it,” Ehde said.

Emma Barry, a first-year all-around gymnast, took 15th place in vault, with a score of 8.400. She also competed in the uneven parallel bar event and earned a score of 9.150 in seventh place. Barry performed for floor exercise as well, placed 11th with a score of 8.750.

Katie Fahrenkamp, a first-year all-around gymnast, performed in the floor event took ninth place with a score of 9.025.

This year, the team has welcomed a lot of first-year gymnasts, which can be a challenge, Ehde said.

Benes said the team is really light-hearted. On away meets like these, the team likes to listen to music and sing karaoke, Benes said.

Despite the scores, Ehde said she was really proud of her team.

“I think we did pretty well considering we had a rough week before that. We did really well coming together as a team,” Ehde said.

The Blugolds will host Hamline University at 6 p.m. on Thursday, Feb. 6 for a Faculty/Staff Appreciation Night.