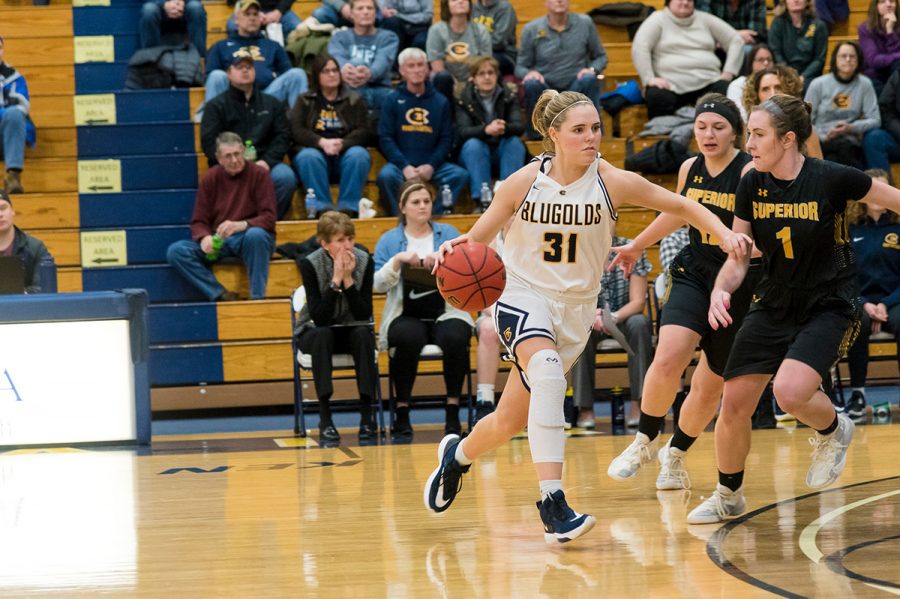 The UW-Eau Claire women’s basketball team beat the UW-Superior Yellowjackets as they started off their three-game week with a win. The Blugolds applied pressure to the Yellowjackets all game long, which built their lead on Superior after every quarter of play.

Despite accumulating a 23 point lead by the beginning of the fourth quarter, the Blugolds remained in a full-court press for a majority of the game. This pushed them to score in transition and grow their lead.

Hallee Hoeppner, a fourth-year guard and all-American 2019 WIAC player of the year, lead the score for both teams with 27 points.

“We made sure we were in the mindset to be aggressive,” Hoeppner said. “On offense, we wanted to attack the rim and find the extra pass to shooters,”

The team’s game plan mentality going into each game, according to Hoeppner, is to never let up and continue to get better.

Katie Essen, a third-year center, said one of the main focuses of their season has been to score a basket, then get the stop on defense.

“It’s just another game, we knew we just had to play it,” Essen said. “We don’t want to get caught up in the strategy of it. We just try to play basketball and stay calm.”

Hoeppner and Essen said, when their team has a comfortable lead, they try to maintain the same aggressive attitude as a team — rather than letting up — and use the time to grow as a team as well as work on their game.

Tonja Englund, head coach of the team, said she felt her team did a great job against Superior. Englund said the game was a good opportunity to get players that don’t start more minutes and rest their starters.

“I’m always trying to grow my bench, that’s important,” Englund said. “Our starters are really solid and tonight presented some great opportunities to expand our depth.”

Coming off of a double-overtime win against UW-Stout and looking ahead to two more games this week, one of Englund’s goals is to extend the bench and prevent injuries throughout the rest of the season. Englund said the team’s four senior’s leadership is helping them to stay motivated and continue pushing.

The team’s defense performed at a higher level this year than it was at last year, which Hoeppner, Essen and Englund said is a huge relief for them this season.

“Regardless of who’s in and what the score is, I want our defense to remain solid,” Englund said. “Defensively, we’re more committed and play harder (this season). We’ve enjoyed the luxury of having the confidence to take shots and know that if we miss them, we can get the ball back on defense.”

Englund said she is content with the success they’ve had so far this season.

“We now have the confidence and leadership to bring us close wins,” Englund said. “We want to be there at the end and have a chance to win a championship.”