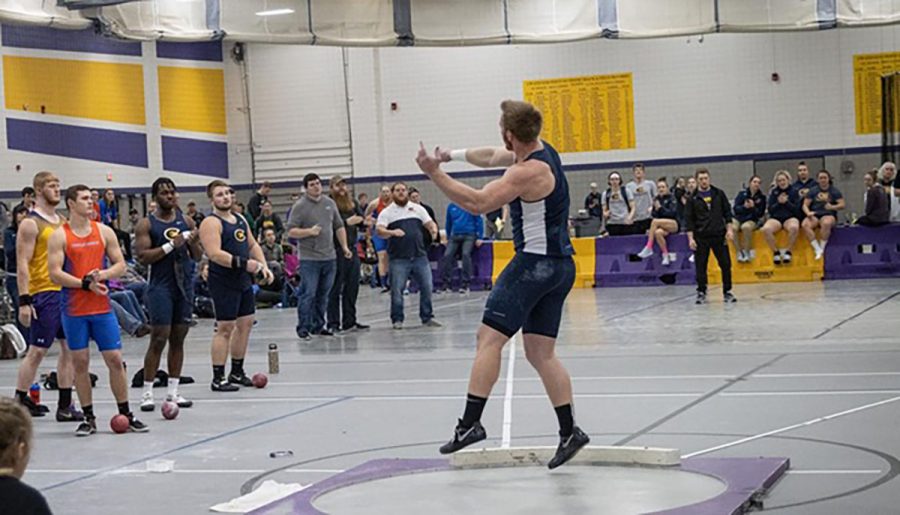 Chip Schneider, the head coach of men’s indoor and outdoor track and field, said the throwers “highlighted the men’s performance” at Saturday’s track and field meet.

At what was called the Big Dawg Invite at UW-Stevens Point on Saturday, Feb. 8, Blugolds on the men’s track and field team placed fourth overall.

According to blugolds.com, UW-Eau Claire placed in the top three for eight of the men’s events.

Anderson said the week of practice he had before Saturday’s meet was one of the best weeks of practice he’s ever had and said a decent number of his teammates achieved personal records at the meet.

Even so, Chip Schneider, the head coach of men’s indoor and outdoor track and field, said the team knew they would be tired going into the meet this past weekend.

“Last week was a big week of practice, so we knew going in we would not be at our best because of fatigue,” Schneider said. “Plus we gave the entire distance crew the week off from competing.”

Lijewski, a third-year accounting and finance student, said he was content with his second place result, but also envisions himself improving more before conference and the WIAC championship.

Being at about mid-season now, Lijewski said he and many of his track and field teammates, are exhausted.

“I had big goals going into this meet,” Lijewski said. “We’re in the hard part of our training, so right now I just wanted to feel as good as I could.”

Out of all of the events, Schneider said throwers Boehlen and Anderson “highlighted the men’s performance” at Saturday’s track and field meet because they improved their national rankings.

“I’m kind of focused on the end goal now,” Anderson said. “I know I won’t be satisfied until I’m standing on that podium at nationals.”

Looking toward the St. Thomas Invite on Friday, Feb. 14 in St. Paul, Minn., Anderson said he wants to continue to move up in the national rankings for his events.

Lijewski also said he hopes to improve his conference rankings.

“My goal is to move up in those rankings to feel confident when conference comes around,” Lijewski said.

Schneider said he expects good performances to take place at the St. Thomas Invite on Friday.

“We will look to build this week and next as we prepare for the conference championship in two weeks,” Schneider said. “But I hope we come out of the week healthy.”