First sweep of Pointers in 18 years 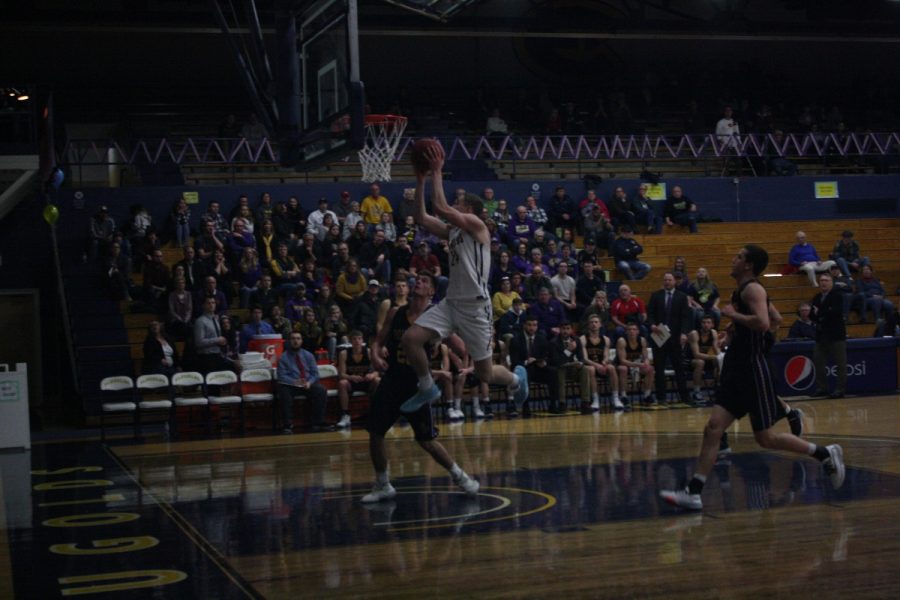 Walking onto the court Saturday, Cole Rabedeaux knew the game was going to be a big one — and it was.

Although he celebrated the Blugolds’ 75-66 victory over UW-Stevens Point, this game had a special significance for Rabedeaux.

The first shot of the game marked Rabedeaux’s 1000th career point as a Blugold — something he’s accomplished in his three years at UW-Eau Claire.

“It’s an achievement I wanted to get because I never got it in high school because I played at two different schools,” Rabiedeaux said, “but really, the number one goal was to sweep Point and get a second win on them here.”

Although the first half started out with 6 straight points from Rabedeaux, the Blugolds cooled off quickly, allowing the Pointers to take an 11-point lead.

The Blugolds struggled with shooting, going 10-for-25 in field goals and 2-for-8 in 3-point goals in the first half.

Blugold head coach Matt Siverling said the problem in the first half wasn’t scoring, but defense.

“We weren’t talking about scoring — we were getting really good shots,” Siverling said. “We were just talking about holding (the Pointers) down. I thought if we could keep them under 30 by halftime, we’d have a really good chance in the second half.”

The Blugolds were able to do just that and close the gap while they were at it, finishing the half 27-29 with a 3-point shot from Luke Reader, a first-year guard.

The Blugolds were able to gain some momentum after the break, taking a 38-37 lead that the Pointers were unable to break for the remainder of the game.

The Blugolds were able to improve their shooting percentages in the second half of the game, racking up 62.5 percent of both 2-point and 3-point shots. Rabedeaux and Brooks made 17 and 12 points in the second half, respectively, and the team’s success on offense maintained the lead that eventually earned them the win.

The Blugolds savored the lead in the second half, especially after the close game the two teams played on Jan. 18 in Stevens Point that ended with a 63-62 victory.

“It was a little stressful at their place,” Rabedeaux said, “ but today, we did what we needed to do and took care of business.”

This second Blugold victory marks the first time UW-Eau Claire has had a season sweep of the Pointers since the 2001-02 season, making this victory taste even sweeter for the Blugolds.

“They’re a really good team, and they were ahead of us in conference,” Carter Brooks said, “so hopefully this win puts us in a good spot.”

The Blugolds are now 6-4 in the WIAC this season and 15-4 overall. The team looks to continue their winning streak Wednesday at Zorn Arena when they take on UW-River Falls for a 7 p.m. tipoff.