Men and women’s teams see improvements over the weekend 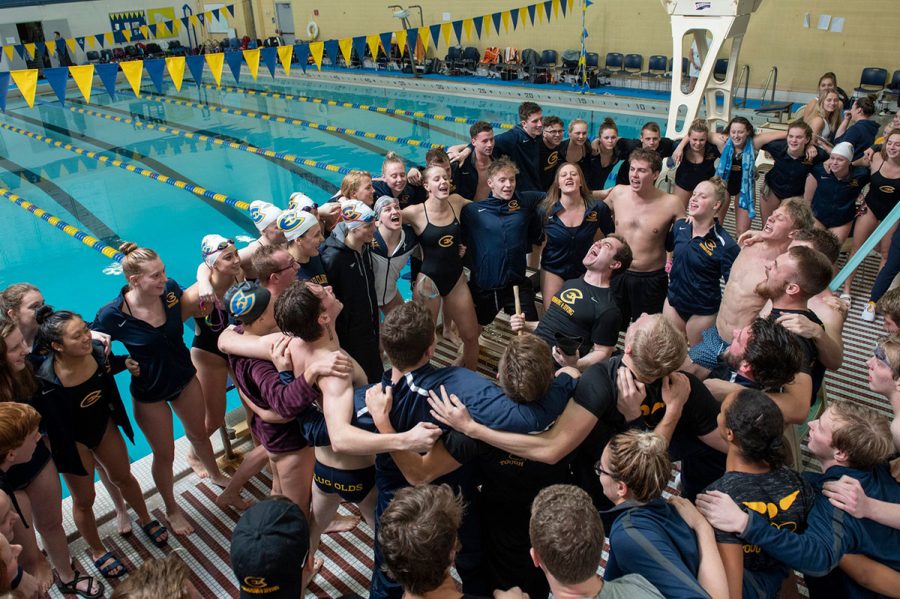 Collin Miller currently has the top time for the 100-yard breaststroke in the country, which he achieved on Saturday Dec. 7.

The men’s team took second place out of ten teams at the Rochester invite in Rochester, Minn. on Dec. 6, 7 and 8.

“We’re going to surprise some people at the end of the season,” Annie Ryder, head coach of the swim and dive team, said.

Glumac-Berberich said all he needs to do at this point — is do well at zones, and he will be able to go to nationals. Which he has already done all three years of college. He also said zone cuts are not a big deal for him.

“I can’t remember the last time I didn’t get the zone cut,” Glumac-Berberich said.

The Blugold swim and dive team (both men and women) are likely to be the least rested in the conference, Ryder, who played a big role in the team’s overall performance, said. Before big meets like this, they taper the week before, which means they have lower-intensity practices in order to come out with high intensity on the weekend.

Collin Miller, a fourth-year swimmer, raced in the 400-yard medley relay. Miller’s 54.20-second breaststroke split was not only the fastest at the meet, but the fastest in DIII. Next, he broke his 50-yard freestyle record with a time of 20.16 seconds.

Miller said he is surprised by some of these outcomes so early in the season. He said he has never been ranked number one in the country before and has had a hard time competing at Rochester the last few years. Despite this, he said his confidence and motivations did not falter because he has worked harder this season than in any other.

“I want to show everyone that absolutely anything is possible if the work is done right,” Miller said.

“If we are faster from the bottom of our roster to the top of the roster, we are a tougher team to beat,” Ryder said.

The team placed sixth out of 15 teams with a total of 624 points. The team aims to be conference champs this season; however, sixth place is not a setback, Ryder said. She said that both teams do not rest or taper as much as other teams in order to keep the high intensity going into the weekend, and the outcome that followed was what they were looking for.

Another important aspect of the meet itself was that there were teams in higher divisions such as St. Cloud and Mankato, Breanna Kimmes, a fourth-year swimmer, said. For Kimmes, this presented itself not as a disadvantage, but as an opportunity.

Ryder has stepped up the ante on practices and training, Kimmes said, and she is impressed with how the team has done mentally, especially the freshmen.

Kimmes said many of them have probably never been through a season this difficult, but it has shown them how much better the struggle can make them. This is also something that Ryder is personally proud to see this season, as she believes from a “depth perspective,” the women’s team is as strong as the men’s team.

One thing the team is working to improve on is the distance from the flags to the wall at the end of a race because some swimmers were getting out-touched, when it should have been the other way around, Kimmes said.

Kimmes said she and the rest of the team visualize the race beforehand. Kimmes said swimming is a very mental sport, and this helps with the mental aspect of the sport.

“You have to mentally prepare and tell yourself that you can do it, or you will not swim fast,” Kimmes said.

The team as a whole is excited about their outlook for the end of the season, Ryder said. As the team takes a break for the holidays, they will return in January for a training trip in Puerto Rico, Glumac-Berberich said, where they will have 2 to 3 practices a day for over a week.

Most of the time, before the season ends, will be taken up by multiple practices a day before meets start up again, Glumac-Berberich said.