Blugolds earn several spots on the podium at the MSOE Invite 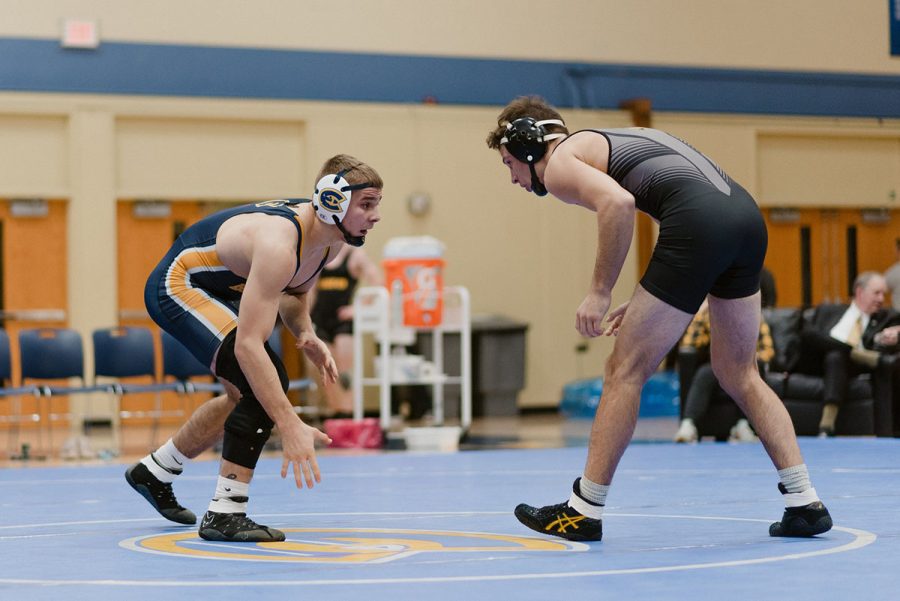 The Blugolds also competed at the Jim Koch Open on Dec. 7.

Several Blugolds made the podium at the Milwaukee School of Engineering Invitational this past weekend.

UW-Eau Claire competed in the MSOE Invite in Milwaukee on Dec. 7 and were led by James Huntley, a third-year wrestler, who took first place in the 197 weight class.

Huntley went 4-0 in his matches, winning his first two matches 14-4 and 9-6 respectively. He advanced to the championship match after an injury default in the semifinal and went on to win the final match with a 5-0 decision to get first place for the event.

Evan Lawrence, a third-year wrestler, took second place in the 174 weight class after getting three pins in his first three matches before eventually losing 4-3 in the championship match.

Jack Marley, a second-year wrestler, fell in the first round of the 225 weight class but due to two forfeits because of injuries, he ended up placing fourth.

Chase Schmidt, a third-year wrestler, finished fifth place in the 165 weight class after tallying a pin in the second round, even though he lost his first match. He went on to win the fifth place match by injury default.

Tyler Vanderlois, a first-year wrestler, also took fifth place at 141 by tallying a pin in the fifth place match in the consolation bracket after losing in the quarterfinal.

The Blugolds had one more fifth place finish in the 197 weight class, with Mason Hawkins, a fifth-year wrestler, taking fifth by medical forfeit after winning in the first two rounds but falling in the semifinal.

Tim Fader, UW-Eau Claire’s head coach, said he was proud of how the team competed in this event over the weekend.

“We were very competitive. We had certain individuals that wrestled a lot of matches, and they seemed to get stronger as the tournament went on,” Fader said. “We had several guys that were scoring a lot of bonus points as far as getting pins and scoring a lot of points in their individual matches and for the team.”

Thomas Severson, a second-year wrestler who also competed in the event, said he was proud of the team’s effort and competitiveness.

“I thought that as a team we competed really well,” Severson said. “Everyone was prepared and excited to wrestle, and I saw lots of improvements made by the team.”

Fader also commented on how well his team has been doing in practice and in training throughout the first half of the season.

“Our training has been going really well,” Fader said. “We’ve had a good first part of the year as far as emphasizing technique and working on having an aggressive style that scores a lot of points.”

The Blugolds return home at 7 p.m. on Friday, Dec. 3 when they will host UW-Stevens Point at the McPhee Center.

This is the last home meet of the semester and it will feature a giveaway of tuition money at the end of the meet that all students in attendance will be entered to win.

Fader hopes to see a great turnout of students for this semester’s final home meet to watch the Blugolds compete and take their shot at winning the tuition money.