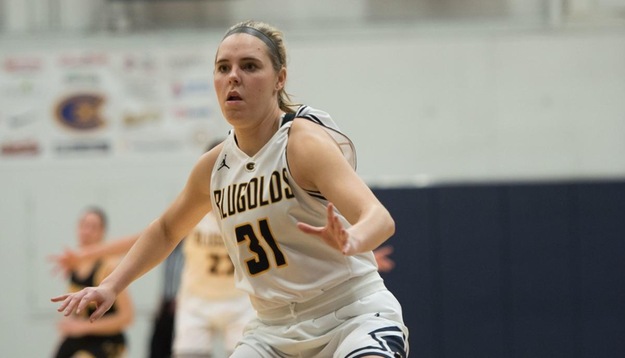 The UW-Eau Claire women’s basketball team fell to Wartburg College in the Blugolds Tip-Off Tournament with a final score of 69-54 this past Sat. Nov. 16. The game brought UW-Eau Claire’s overall season record to 1-3.

Maizie Deihl, a third-year guard for the Blugolds, said the team was able to play tough defense, which contributed to the close score.

“Our goal going into the game was to play really tough defense,” Deihl said. “We knew that our offense would flow along as long as we buckled down and got stops on defense. Overall, throughout the game, we really worked on getting our matchups and communicating on defense.”

The Blugolds took the lead in the second quarter with help from Deihl, who led the Blugolds in scoring with a total of 17 points throughout the game. UW-Eau Claire stayed ahead until Wartburg went on a scoring spree late in the quarter, putting them ahead 35-31.

During the third quarter, the Blugolds put up 10 points and Wartburg put up six, tying the score at 41-41 going into halftime. Deihl said the lack of offensive success in the third quarter hurt the team’s chances of pulling out a win.

“The third quarter we got pretty cold on offense,” Deihl said. “We weren’t getting as many stops on defense, and they really capitalized on that, so I think we just need to put four really good quarters together to beat a team like that.”

The Blugolds only allowed Wartburg to score 12 points in the fourth quarter, but UW-Eau Claire was not able to put up enough points, losing the game with a final score of 69-54.

Though the Blugolds did not come away with a victory over the weekend, Tonja Englund, head coach of the UW-Eau Claire women’s basketball team, said considering the difficulty level of the teams they have faced, she doesn’t think the Blugolds’ 1-3 record reflects their likelihood of future success.

“I do know that the strength of our schedule and what we’re playing early I don’t think is going to show the team that we’re going to have down the run here,” Englund said. “Our league is such a difficult league that I really like to play a tough non-conference schedule.”

Deihl said because it is the beginning of the season, the team is still working on using everyone’s talents in the best possible way, which will help them win in the future.

“We have a lot of really amazing talented people, and I think it’s just putting it all together,” Deihl said. “We have a lot of people that can do different things, so finding a way to get everybody the looks that they’re looking for and to buckle down on defense and to work together will be the best thing to get us where we want to be.”

The Blugolds’ next opponent will be Loras College at 5 p.m. on Saturday, Nov. 23 in Zorn Arena.