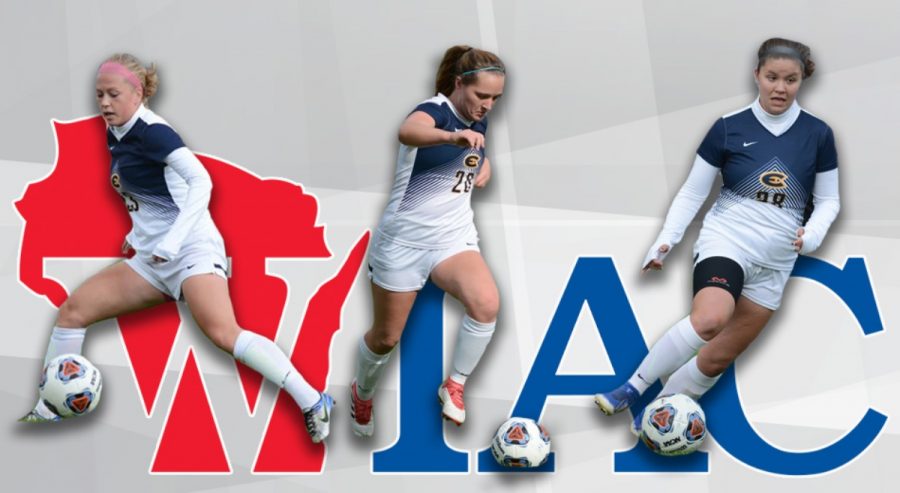 “I couldn’t have done it without them,” Sullivan said about the team.

“It’s definitely an honor, but it’s also a testament to my teammates,” Emily Sullivan, a fourth-year center/midfielder, said about earning the Wisconsin Intercollegiate Athletic Conference first team honors for her fourth season in a row.

Sullivan is one of three UW-Eau Claire soccer players to earn this award this season, and while the season for the Blugolds ended with an upset, the team still views this as a successful season, she said.

The first team honor is awarded to players with outstanding performance throughout the season and are chosen by the coaches for every team in the WIAC; the higher a team’s placement, the more players that can receive the honor, Sullivan said.

Sullivan, with 23 career goals, is the eleventh player within the entire WIAC history to earn the first team honor four years in a row, and only the fourth player in Blugold history to do so. Sullivan said that she feels ‘very fortunate’ to have had this opportunity.

Earning the first team honors this year, Sullivan said, felt different than when she earned it her freshman year.

“I had no idea I could do that,” Sullivan said.

The other two players that earned the award, one of them Kiki Kussow, a second-year center defender, were a big part in the team’s successes this year, Sullivan said. Kussow, who just finished her first year with the team, said she did not even get to play the first game.

“It was a hit to my confidence,” Kussow said.

Her first time playing was during the second game against St. Catherines, where she said she used that opportunity to show the coach why she is a valuable player, Kussow said. Since that first game, she’s started every game; that’s 18 out of 19 games.

One important life lesson Kussow said she learned from being on the team is accountability, which is something Sean Yengo, the head coach, always emphasized. Players were required to log how they were feeling and were held accountable for doing so, Kussow said.

The other player to earn the first team honors, Emily Stange — a second-year center midfielder — is someone who is constantly watching professional soccer and consulting coaches, Kussow said.

Stange, who scored three goals this season (one game winning), said she was pretty surprised to have earned the award, although it was something she had been working toward this season. All the hard work she had put in was finally paying off.

Stange said her main role in center mid is to be the playmaker, which is someone who sets up an opportunity to make a play, or to score. Last season, Stange said she was voted playmaker of the year by the team.

“I feel like that’s probably a big part that helped me to get this,” Stange said.

A person that is inspiring to her is Sullivan, because no matter if things are not going well, she keeps a positive attitude, and is never giving less than 100 percent, Stange said.

Even though the season ended abruptly against UW-River Falls in round one of the WIAC, the team had the most wins in a single season since the last time they won the WIAC in 2008, Sullivan said.

“I think we definitely had a very successful season overall,” Sullivan said.