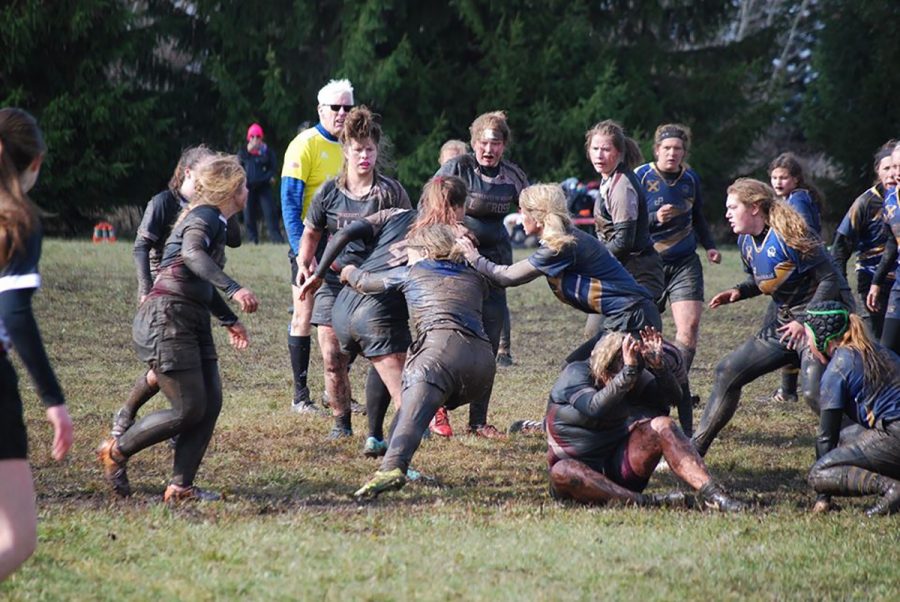 The women’s rugby club will be hosting the first round of the USA Rugby Women’s DII Fall National Championship on Saturday versus the Minnesota State University, Mankato.

The team left the field muddied and bruised, but Becky Kasprzak, the team’s vice president and a second-year business management and entrepreneurship student, said the match was her favorite memory from the season.

“Oshkosh is probably our best friend,” Kasprzak said. “We also played them in conference last year. To play against your best friends for such a huge title — it’s quite an honor.”

Despite the loss last weekend, the team will be hosting round 32 of the USA Rugby Women’s Division II Fall National Championship on Saturday, where they will compete against Minnesota State University, Mankato. With a win this weekend, the team could advance on the round 16 and 8 in Missouri and eventually the semifinals and finals in North Carolina.

Overall, the team has had quite a successful season, Danielle Bauer, the club president and a third-year communications science disorder student, said.

“For the most part, we’ve done great,” Bauer said. “We lost one tough game against Northern Michigan, and last weekend we fell to Oshkosh, but besides that it was all wins. We ended second in conference, and first in our division.”

Kasprzak said one of her favorite parts about rugby is the friends you make with players both on and off your own team. She has played the sport since high school and said her dad played for the UW-Eau Claire men’s club rugby team when he was in college.

“Rugby has given me a lot of confidence as a person,” Kasprzak said. “I’ve become a better leader, more confident in myself and my body. It’s given me the best friends I’ve ever met, even from high school rugby. I’m still best friends with some of those girls.”

Bauer said she first started playing rugby her first year of high school, where she competed on a regular season team. During her sophomore year, she began playing on the Minnesota state team and did so through her senior year.

“The rugby community is inclusive and welcoming, which is why I stuck with it,” Bauer said. “I love the sport, and having a mutual understanding of rugby no matter where you are is nice.”

At UW-Eau Claire, approximately 25 women are on the club team, Kasprzak said. Each comes in with a variety of past experiences and all are welcomed to join the team.

“It is a sport that welcomes anyone, you don’t even need any athletic experience,” Bauer said. “You just come out and you get this new group of friends and family. There’s a place on the field for everyone, of all different sizes and strengths.”

With such a tight-knit team, comes a variety of inside jokes and stories to share. One such tradition is even included on the team’s crest. Their jerseys sport the letters “KTFTO.”

“It’s a tradition,” Bauer said. “I can’t say what it means. When rookies come in, they learn what it means. It’s our team symbol, our team motto that keeps us together.”

At 12 p.m. this Saturday at Bollinger Fields, the team will take on Minnesota State University, Mankato in round 32 of the USA Rugby College National Tournament.