Blugolds move up four places in the rankings 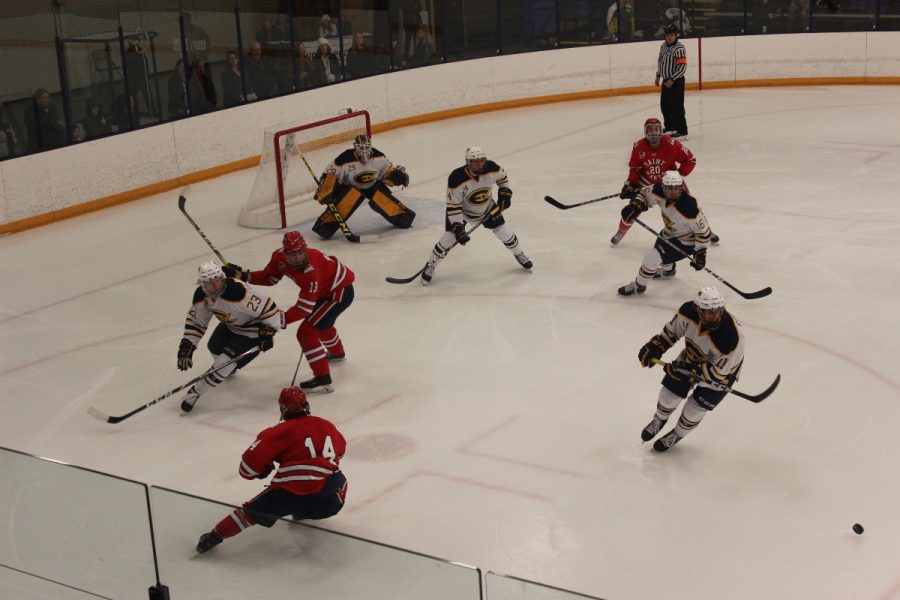 Blugolds move up four places in the rankings

After opening the season with a tie, the Blugolds won two games in a row at Hobbs Ice Arena and scored 12 goals between the two games.

Of the 12 goals, they all had at least one player with an assist to the 11 different players to score.

Six of the seven goals were scored against Cooper Lukenda and one against Noah Parker, who are second-year and fourth-year goalkeepers for the Oles, respectively.

The Cardinals had an empty net for 41 seconds, which the Blugolds were unable to capitalize on and score.

The Blugolds only allowed four goals all weekend — two to both the St. Olaf Oles, and the Saint Mary’s Cardinals.

“Obviously, a goal of ours is to keep shots against (us) down,” Matt Loen, the Blugolds’ head coach, said.

Loen said that he is happy with the number of goals they were able to score and added that he was especially pleased with the turnaround from only scoring one goal against St. Johns last weekend.

Zach Dyment, a third-year goalkeeper, played against St. Olaf and made 21 saves against the 23 shots he faced.

Riley McVeigh, a second-year goalkeeper, played against Saint Mary’s and made 13 saves against the 15 shots he faced.

Of the 68 faceoffs against the Oles, the Blugolds won 38 of them. This is lower than their faceoff success against the Cardinals, where they won 47 of the 67 faceoffs. The difference is roughly 14 percent.

The first and only power play goal on the season for the Blugolds came from Cole Paskus, a third-year forward. Jon Richards and Andrew McGlynn — third-year and second-year forwards, assisted him.

“That’s our biggest weakness,” Loen said. “In practice this week, we’re going to be trying some different personnel, formations and styles.”

Against Saint Mary’s, the Blugolds had 13 penalties, which was a total of 45 minutes and included two major penalties.

Against St. Olaf, the Blugolds committed five penalties for 10 minutes, none of which were major penalties.

According to the NCAA rankings, the Blugolds moved up from twelfth to eighth in Division III hockey rankings and are only eight points behind the seventh-ranked team, Trinity College.

There were three new teams inside the top 15 in the rankings for DIII hockey. Milwaukee School of Engineering, Salve Regina, and St. Thomas are ranks 13, 14, and 15, respectively. They were not ranked as of last week.

The only team inside the top 15 that did not move in the ranking was the University of New England, which remains unchanged at 11 overall.

The Blugolds will be on the road in Minnesota this weekend, playing against the unranked Gustavus Adolphus Gusties, who are 3-1 on the season, and the fourth-overall and undefeated Augsburg Auggies.