It’s time to drop the puck 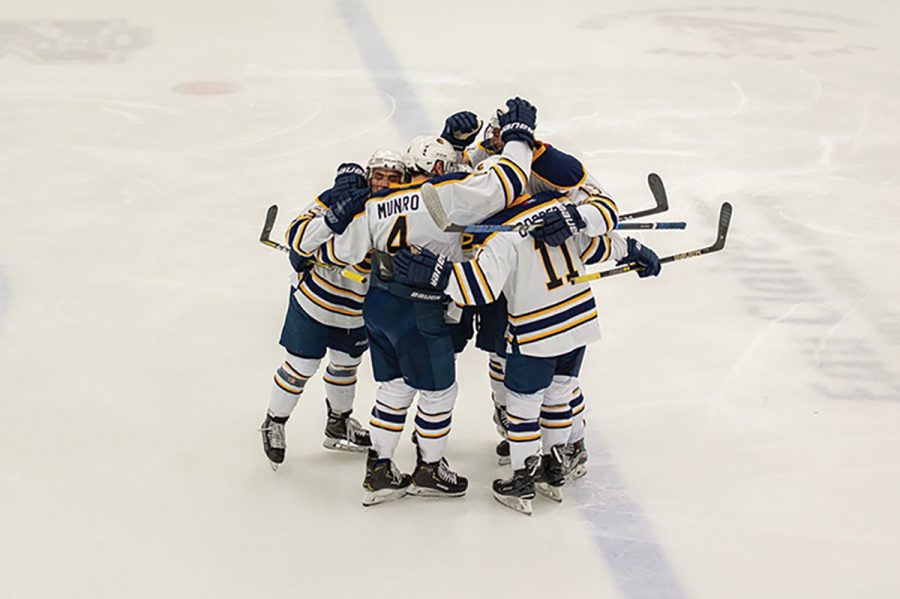 The Blugold hockey season is approaching rapidly as both the men’s and women’s teams have their final tune-ups of the preseason.

The men’s hockey team posted a 19-7-2 record last season, earning them the No. 2 seed in the conference tournament where they fell to No. 1 UW-Stevens Point. This season will start the same way last year ended.

The Blugolds will start the year No. 11 in the country. UW-Stevens Point opens up at No. 1, but that doesn’t seem to faze Logan Von Ruden, a fourth-year marketing student and second-year captain for the men’s team.

“It’s kind of one of those things you see and don’t pay much attention to,” Von Ruden said. “A lot of that polling is based on how teams ended up last year.”

Von Ruden said it was nice to be acknowledged but said they have their work cut out for them.

“We have five incoming freshmen, making depth our strength this year,” Von Ruden said. “When you have a deep roster, it creates competition at practice. It pushes consistency and pushes our guys even more. We lost four seniors but we’re looking to make that next step towards a national championship.”

The Blugolds played St. Thomas in an exhibition game this past weekend and Von Ruden had encouraging words to say about their first game.

“I thought we were moving the puck well and broke out of the defensive zone really well,” Von Ruden said. “We have to clean up the traffic in front of our net. Clearing opponents and loose pucks is an area we need to work on.”

The Blugold men’s hockey team opens up their season this weekend at home on Saturday, Nov. 2 against St. John’s of Minnesota.

The Blugold women’s hockey team is coming off a historic season from last year. The Blugolds made it to back-to-back NCAA tournaments. The Blugolds lost in the first round of the tournament to St. Thomas.

This year, the Lady Blugolds are looking to build off last year’s momentum. Sami Meister, a fourth-year biology and criminal justice student, talked about how she believes her team will be tough to beat.

“We lost eight seniors last year but brought in 15 new girls,” Meister said. “We are extremely young and talented. Once all the freshmen get the hang of things, I believe that we will be a strong team that will be very tough to defeat.”

The women’s team was just ranked No. 7 in the preseason poll, one spot ahead of UW-River Falls. Last year, the Blugolds beat UW-River Falls in the conference championship 7-3, securing their spot in the NCAA tournament.

“We were all very excited to see the results of the preseason poll,” Meister said. “It is an honor to be in the rankings, but it does put a target on our back as some teams are not listed as high as we are.”

Like the men’s team, the women had a tune-up game against UW-River Falls and Bethel University. They lost to River Falls 3-2 and tied Bethel 3-3. While they don’t count towards their records, Meister said several positive things came from those games.

“I believe that our team is full of hard workers and girls who really care about what they are a part of here, being on the hockey team,” Meister said. “That was something that was very noticeable during these scrimmages.”

The UW-Eau Claire women’s hockey team opens up at St. Norbert this Friday, Nov. 1 followed by six straight away games. The first home game for the Lady Blugolds is Tuesday, Nov. 26.