Diving into the season 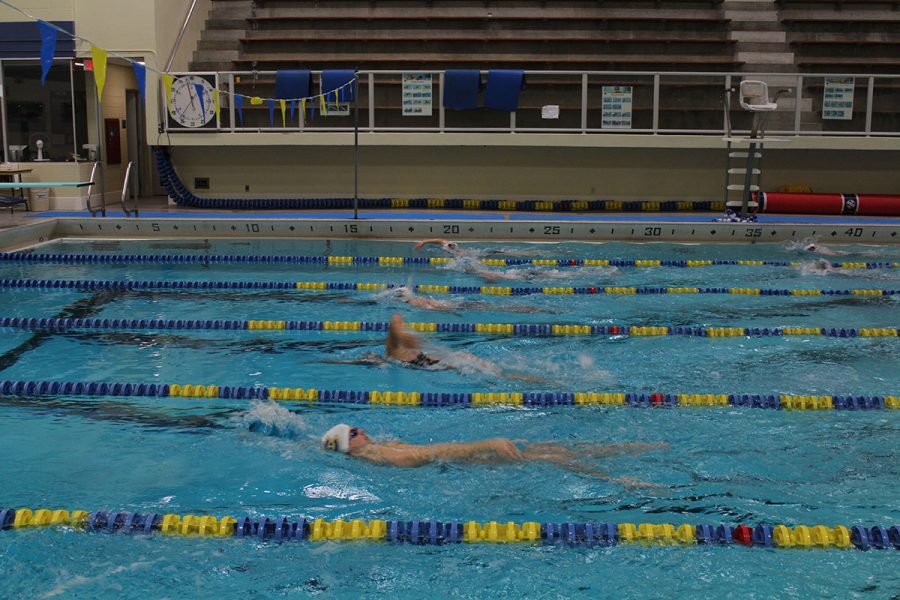 The swim and dive team are practicing for their next meet against Luther College on Oct. 26.

Breanna Kimmes, a fourth-year swimmer, said she believes the women’s swim and dive team stands a good chance of taking first in conference this season.

UW-Eau Claire’s men’s and women’s teams are 1-0 so far this season, with both teams taking the win against UW-Oshkosh on Oct. 12.

As both teams continue to focus on the season ahead, the women’s team is swimming toward their goal of becoming conference champs, while the men hope to achieve at least second, Kimmes and Dylan Glumac-Berberich, a fourth-year diver said.

To help the team carry their momentum from last season into this season, Kimmes said there have been a lot of new first-year students who have stepped up right away and have contributed to creating a great team dynamic.

They are also holding each other a lot more accountable in terms of eating healthy and drinking water, Kimmes said.

According to Kimmes, one of the things that really helped the team achieve a successful previous season was the team’s ability to motivate each other, which they hope will continue throughout this season.

“Can’t really swim fast for your team if you really don’t have a team behind you,” Kimmes said.

La Crosse is the team to beat for the women’s team, coming in first last season at conference finals, and the UW-Eau Claire team hasn’t been conference champs since 1999, Kimmes said.

However, the team is cautious about the women at UW-Stevens Point, who came in third last season and have built up a strong team this year, Kimmes said.

At the meet against Oshkosh, the men’s team won by a score of 170-71, a mere point away from the 100 mark. Glumac-Berberich broke the school record for the 3 meter dive and also holds the record for the 1 meter 6 dive.

Last season, the men placed third in conference behind Stevens Point and La Crosse. This season, the team is focused on “giving Stevens Point a run for their money,” but also sending other people to nationals besides the same two people every season, Kimmes said.

La Crosse, however, is more in contention with UW-Eau Claire than Stevens Point, as Stevens Point has been the dominant team for over 20 years, Glumac-Berberich said.

Glumac-Berberich said he is personally working on trying to be more successful overall in practice.

“I think consistency is huge in diving, always, and (I’m) trying to improve on that,” Glumac-Berberich said.

The coaching staff for the divers is something to be admired and is one of the things he likes most about being a part of the team, Glumac-Berberich said. He also said he is really impressed by the work ethic of his fellow athletes on the team and the energy they put in during practice.

Kimmes has hopes for the future of the team in light of her graduation drawing closer.

“I know swimming is not just this forgotten sport, but one that often nobody cares about,” Kimmes said, “I just hope they can show people who we are.”

The UW-Eau Claire swim and dive team’s next meet is at Luther College on Oct. 26. Their first home meet is on Saturday, Nov. 2 at 1 p.m.