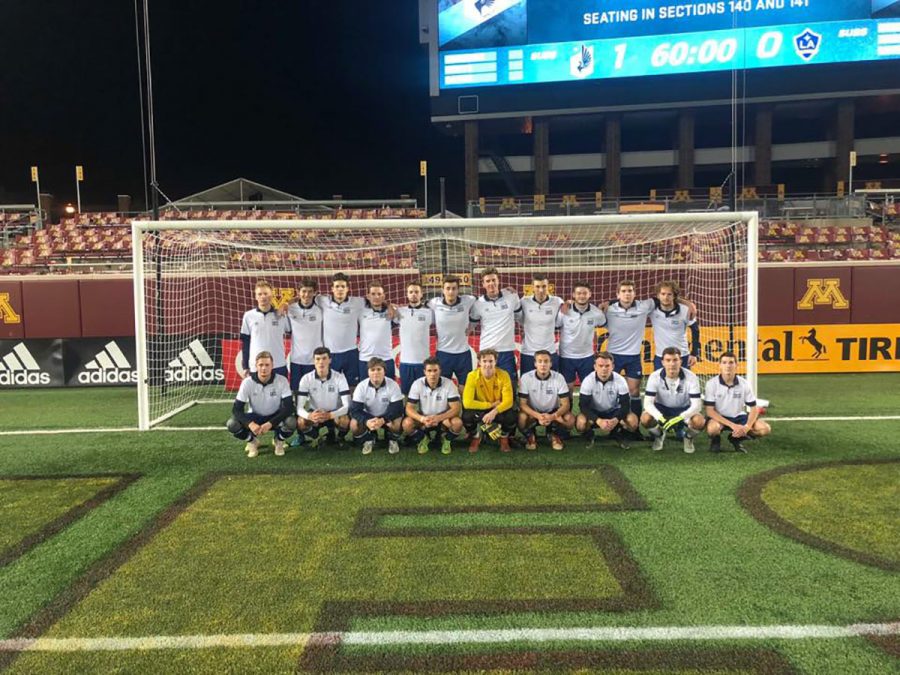 UW-Eau Claire is home to 27 club sports, allowing students to participate in sports that are not offered by the university. Baseball, cheer and stunt, Mixed Martial Arts and triathlon are available, to name a few.

The men’s club soccer team — just like the men’s club baseball team — is one of the few club sports that has a university sport in women’s soccer and women’s softball team, but has no men’s equivalent. Because the university doesn’t offer soccer as a sport, students who want to get involved must turn to club sports to stay competitive.

Trevor Glodowski, a fourth-year information systems student, is the current president and captain of the team. He has been a part of the team all four years he has been in school.

“Coming out of high school, I wanted to play college soccer,” Glodowski said. “Some division three schools were recruiting me. I toured UWEC and I knew they had a club team. So, I decided to come to UWEC.”

The club team is made up of 22 men ranging from fifth-year seniors to incoming first-years. The team is part of a conference spanning the Midwest with teams from Wisconsin, Minnesota, Iowa, Ohio, Illinois, Indiana and Michigan.

“Traveling to games is a lot different than people might think,” Glodowski said. “We usually just carpool. It’s a lot easier than setting up a bus and is a lot cheaper.”

The Blugolds play against other division three schools, as well as some division one schools like Madison, Marquette and Milwaukee.

Hunter Henk, a fourth-year marketing student, is another captain of the team along with Glodowski. Henk has been a part of the team for four years as well.

“When I came to Eau Claire, I wanted to still play soccer,” Henk said. “I knew the school didn’t have a real team, so I joined the club team. It’s been some of the best competition I’ve ever experienced.”

Several of the schools in the Blugolds conference have an actual team, putting the Blugolds at a slight disadvantage.

“When we play against Madison or Marquette, we know it’s going to be a tough game,” Henk said. “A lot of those guys are division one caliber. They either just got cut from the real team or are out of eligibility so they join the club team.”

“Learning how to manage very diverse group of guys is a skill I’ve had to learn,” Glodowski said. “Learning how to communicate with the guys and get my point across to them isn’t easy. Being president means I am a coach, administrator and player all in one.”

Henk is also apart of the UWEC track and field team, making time management a skill very valuable to him.

“Being on the soccer team, track and field team, school and working makes it hard to find time,” Henk said. “Days can be long, but I think its good for me. It’ll be good for me in the real world when I finally get there.”

The Blugolds travel to Madison and Whitewater this weekend. The final home game is homecoming on Friday Oct. 11. The game starts at 7pm at Bollinger Fields.

“This is a very high level of play,” Glodowski said. “We have played against actual teams and have won. This isn’t an intramural sport. We’re always looking for more athletes.”

For tryout information, visit the UWEC website, search club sports, and scroll down to club soccer, or you can visit their Facebook page.