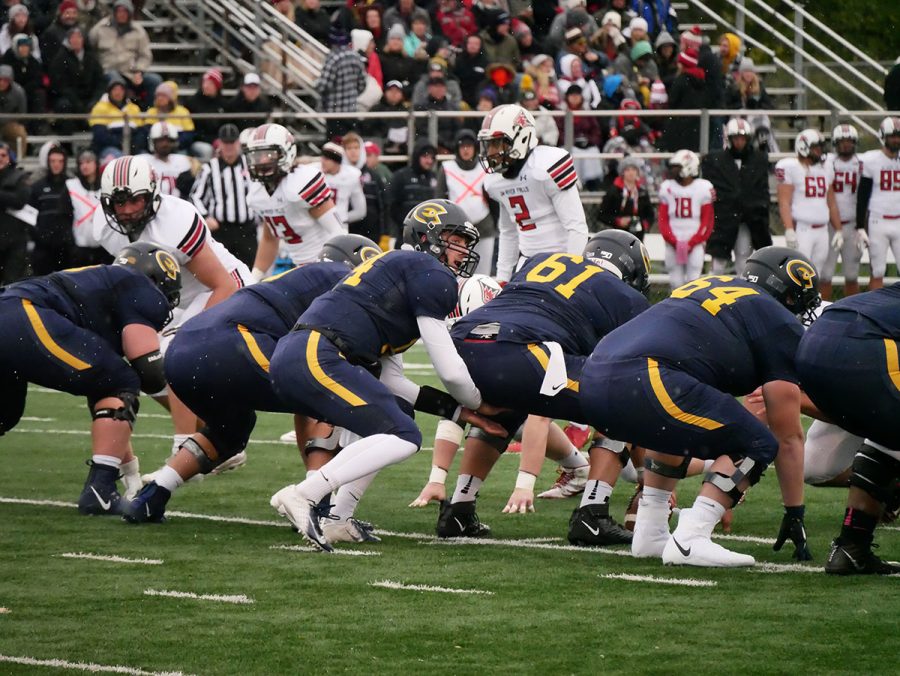 Blugolds score a victory against the UW-River Falls Falcons.

UW-Eau Claire remains undefeated at home after beating  UW-River Falls 27-14 at Carson Park in what was UW-Eau Claire’s Homecoming game.

The Blugolds offense ran the ball for a total of 338 yards, with third-year running back Austin Belot accounting for a season high of 223 of those yards over 30 rushing attempts. Belot alone had more yards than the entire River Falls offense (205).

UW-Eau Claire was also able to convert seven of its 15 third-down attempts and failed to convert on fourth down in their one and only attempt to do so.

The Blugold offense passed the ball for a total of 109 yards, with 63 of those yards coming from second-year quarterback Jonathan Malueg, who was five-for-seven on passing before he was taken out with a still unconfirmed knee injury.

Following his injury, Malueg was assisted directly to the locker room with the help of two training staff to avoid putting any of his weight on his affected leg.

In total, the Blugold offense acquired 447 total yards of offense — a season-high — thus beating the previous high of 362 yards against Loras in the season opener.

Malueg left the game roughly two and a half minutes into the second quarter. He returned with the rest of the team after halftime wearing a full leg brace and using crutches.

“I don’t know a whole lot right now,” Wesley Beschorner, the Blugolds’ head coach said. “I know he was in crutches, so that’s never good. I know that he’s a tough kid, so he’s going to do whatever he can to help us win.”

Going forward, the team is planning on having Johnson start when they go to Oshkosh to face the UW-Oshkosh Titans.

“Obviously I feel bad for Jonathan (Malueg),” Johnson said. “But I’m next in line so I’m just gonna step up.”

Malueg is the offensive captain and Johnson said he feels that filling in as quarterback also includes the role of leadership responsibilities associated with being the captain.

“Even just being the quarterback, you’re kinda like the offensive captain, even if you’re not actually a captain,” Johnson said. “You’re just a leader, so it’s what I got to be.”

“We’ve gotta be more ball-secure, there’s no question,” Beschorner said. “We’ve got to get takeaways and eliminate big plays and create big plays.”

The Blugold defense held the Falcons to 205 total yards of offense, with 158 of those from passing and 47 from rushing the ball over 31 attempts — averaging 1.5 yards per carry. The defense also blocked a punt, courtesy of third-year linebacker Victor Martinelli.

“I honestly blocked that with my butt,” Martinelli said. “I didn’t want to get a penalty. I was anticipating contact and just parted (ways). I was going a little headstrong. I didn’t know what to do, so I gave it a booty-bump and it prevailed.”

The defense allowed the Falcons seven of 16 third-down conversion attempts and neither of their two attempts on fourth down.

Beschorner said that the team will continue to talk about ball control as they prepare to play against the Oshkosh Titans this Saturday — looking for their first win on the road this season and to improve on their one-and-one record in the Western Intercollegiate Athletic Conference.