Blugolds win against No. 6 team by two point difference 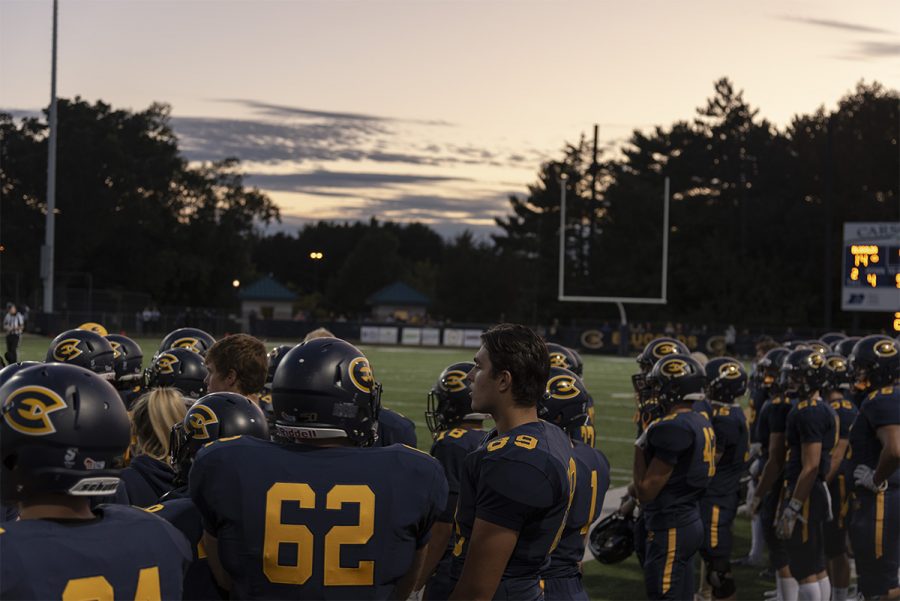 The unranked Blugolds won against the nationally-ranked sixth overall St. Thomas Tommies 21-19, taking a “huge stepping stone for where the program is headed,” Jonathan Malueg, the second-year quarterback said on Saturday.

The Blugold offense was one-for-13 on third-down conversions, with 62 yards passing over the course of 14 passing plays, in which six of those were completed passes.

There were also 36 rushing attempts, which summed to 143 net yards of offense,  averaging four yards per carry. The offense as a whole acquired 205 net yards.

The Blugold defense was on the field for 103 plays and allowed the Tommies 12 of their 25 third-down conversion attempts. The Tommies had 313 yards passing and 166 yards rushing, summing to a total of 479 total yards of offense. The Tommies had four turnovers — two of them fumbles, and the other two interceptions.

“(The Blugolds) expected it because they believed and they deserved to win,” Wesley Beschorner, the team’s head coach, said. “We’re focused on how much better we can get this week.”

Sam Romanski, a fifth-year linebacker, said the Blugolds’ success was a team effort.

“It feels great,” he said. “Definitely a team win.”

Romanski said there is a new identity for the Blugold football team, and the team has had a big culture change. He said he thinks the mindset of the team coming together is where it needs to be.

“We knew we were in for a battle,” Malueg said. “We came out and executed.”

The Blugold offense scored on its first play — a 24-yard rushing touchdown by Austin Belot — which took place from the St. Thomas 24 yard-line following the 77-yard kickoff return by Keshaun Story, a first-year wide receiver.

The Blugold defense then forced a fumble on the Tommies’ first offensive play. The fumble was forced by third-year linebacker Victor Martinelli and recovered by third-year defensive back Carmelo Rosado.

When the Blugold offense took over at the Tommies’ 34 yard-line, they scored on their second offensive play: a 29-yard pass from Malueg to fourth-year wide receiver Antwan Moore.

It was this series of events that put the Blugolds up 14-0 within the first two minutes of the game.

“This is a huge stepping stone in where our program is headed. We just knocked off one of the best teams in the nation,” Maleug said.

Malueg continued to say that he and his teammates don’t pay attention to rankings. He believes if the team can continue to execute on game-day, they’re capable of beating anyone in the nation.

“We left a lot of things out there,” Beschorner said. “The value of practicing football is you continue to get better. We’ve got to worry about what we can do in order to win the game. (We) can’t really worry about the opponent and all that, because they’re practicing, too.”

This is Beschorner’s first semester as the Blugold football’s head coach.