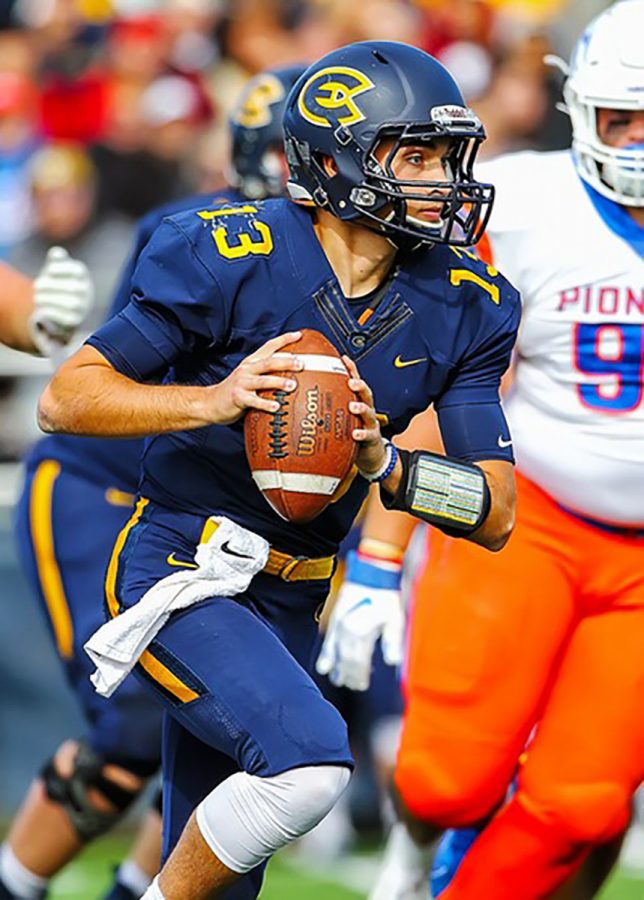 The UW-Eau Claire Blugold football team is no longer undefeated at home after losing 8-43 to the UW-Platteville Pioneers in Carson Park.

The Blugold offense ran the ball for 146 yards over 35 attempts – averaging 4.2 yards per carry – with Austin Belot, the third-year running back, accounting for 118 of those yards in his 19 carries, averaging 6.2 yards per carry.

Belot came off the field in the second half and returned to the sidelines with crutches and ice over his ankle. He was not wearing a brace or splint.

“He had been knicked-up on that ankle before,” Wesley Beschorner, the Blugolds’ head coach, said. “So, that was not good to see.”

Beschorner looks forward to seeing Belot back soon and said on Monday, two days after the game, that Belot is day-to-day.

“It’s tough to count him out. He’s really prideful in his performance and how he can help this football team,” Beschorner said. “As many of our players (are).”

Belot is ninth overall when compared to other running backs in Division III football, according to NCAA Statistics. He is the highest ranked WIAC running back, with the next highest running back in the WIAC being Alex Peete, the second-year running back for UW-Whitewater, who is ranked 106 overall.

Josiah Johnson, the second-year quarterback, was 19 for 31 on passing, acquiring all of the Blugolds’ 183 yards of passing. Tristan Bradley, a second-year backup quarterback, did not complete either of his two pass attempts.

“This is the first time we’ve gone through (losing) two games in a row,” Beschorner said, “Obviously, not what we expected. However, it happened, and you move on and try to learn from it.”

Beschorner says he sees the players learning how to take things day-by-day and play-by-play.

In total, the Blugold offense acquired 329 total yards of offense.

“We had a couple of drives where we just didn’t string enough first downs together,” Beschorner said. “We just couldn’t find the rhythm. It felt like we were there, and all of a sudden, it was falling away from us.”

The Pioneers acquired 405 yards of offense, with 314 of those yards coming from the 27 completed passes on their 37 attempts and 91 yards rushing over their 30 rushing attempts — averaging 3.0 yards per carry.

“Whether you win or lose, I think your preparation should stay a lot the same,” Beschorner said. “However, you do need to reflect and look (at the details).”

Beschorner explained those details as being holistic of the team, referring to coaches and players, and whether they could have prepared better or in different ways.

“We want to win in everything that we do, so we’re going to focus on that,” Beschorner said, “But we’re also going to have fun doing it.”

The Blugolds are going on the road for two away games in a row, after being 0-3 in away games throughout the season.