Blugolds fall to Titans on the road, 31-3

Blugolds fall to 1-2 in their conference 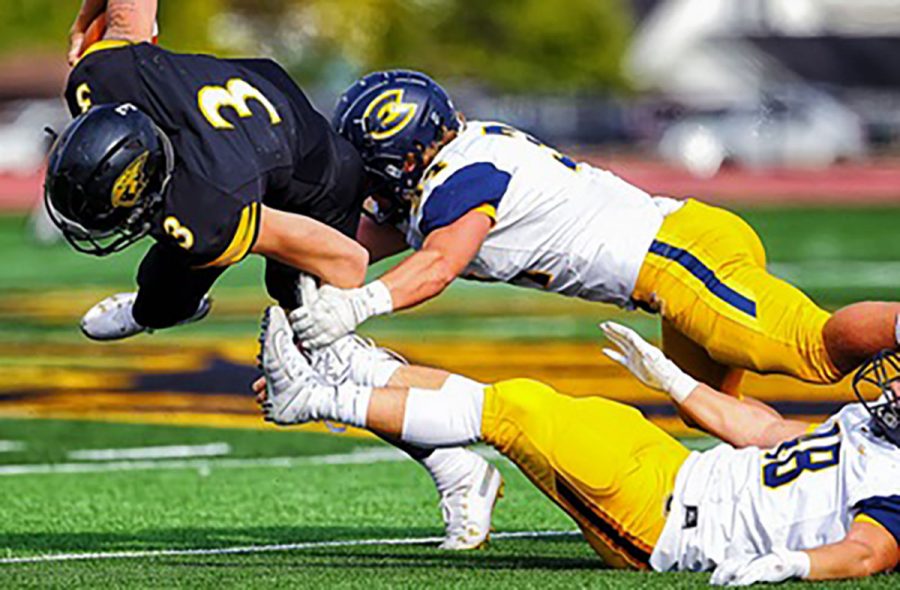 Alex Mashak makes the tackle in the game against UW Oshkosh.

The UW-Eau Claire Blugolds remain winless on the road after losing to UW-Oshkosh 31-3 in Titan Stadium, bringing them to 3-3 overall, and 1-2 in the Wisconsin Intercollegiate Athletic Conference.

The Blugolds offense ran the ball for a net of 63 yards, with Austin Belot, the third-year running back, accounting for 102 of those yards — making this his fifth 100+ yard game this season.

“Whether (Belot) has 100 yards or he has 20 yards,” Wesley Beschorner, the Blugolds’ head coach said, “as long as we win, that’s the only thing that matters.”The net yardage is lower in part because of the eight sacks the Titan’s had on Josiah Johnson, the second-year quarterback, which resulted in 51 negative yards.

Beschorner said the sacks are not only one player’s or group’s responsibility. He talked about the offensive line and running backs needing to perform better blocking, while Johnson needs to make quicker reads and passes.

UW-Eau Claire was also able to convert five of its 17 third-down attempts and failed to convert on fourth-down in either of their two attempts.

Johnson completed nine of his 15 pass attempts, amounting to 49 total yards. He did not throw any interceptions.

“We just got to get back to what we’re used to doing,” Johnson said. “Making the right reads, making the quick, decisive reads.”

Beschorner said Jonathan Malueg, the second-year quarterback who was previously the starter, is officially out for the season after knee surgery. He did not specify what the injury was.

“I’ve stepped right in (to the leadership position), I’m the starting quarterback so everyone looks to me to be the leader,” Johnson said. “Everyone’s patting me on the shoulder like, ‘Hey, let’s go,’ so it’s been great.”

“We had a couple of good drives,” Beschorner said. “But not enough, so we’ve got to work on that a lot.”

The Titans acquired 355 yards of offense, with 114 of those yards coming from the 11 completed passes on their 27 attempts and 241 yards rushing over their 39 rushing attempts — averaging 6.2 yards per carry.

With those 114 yards passing alone, the Titans acquired two more yards than all of the net offense by the Blugolds.

In their 13 third-down attempts, the Titans converted on five of them. They had 20 total first-downs, which means that 15 of their first-downs came on either first or second down.

In comparison, the Blugolds had nine total first-downs, which means that they only received a new set of downs four times on either first or second down.

Of the four times the Titans entered the red-zone, they scored three rushing touchdowns and one field goal.

“It doesn’t matter who we’re playing,” Alex Mashak, the third-year linebacker, said. “We’ve just got to do our job to the best of our ability.”

Mashak said the defense is going to be watching more film, be more focused in practice and hone in on the things they determined need to be focused on.

“Win or loss, you have to move on very quickly because you have another team coming in here that’s a very good opponent,” Beschorner said. “It doesn’t matter who you play. Every single game is the game.”

On Saturday, Oct. 26, the Blugolds will host the UW-Platteville Pioneers at home in Carson Park. The Pioneers are 5-1 overall, and 2-1 in the Wisconsin Intercollegiate Athletic Conference.