Women’s tennis team bounce back with a victory

Team believes that positive mindset will ensure success this season 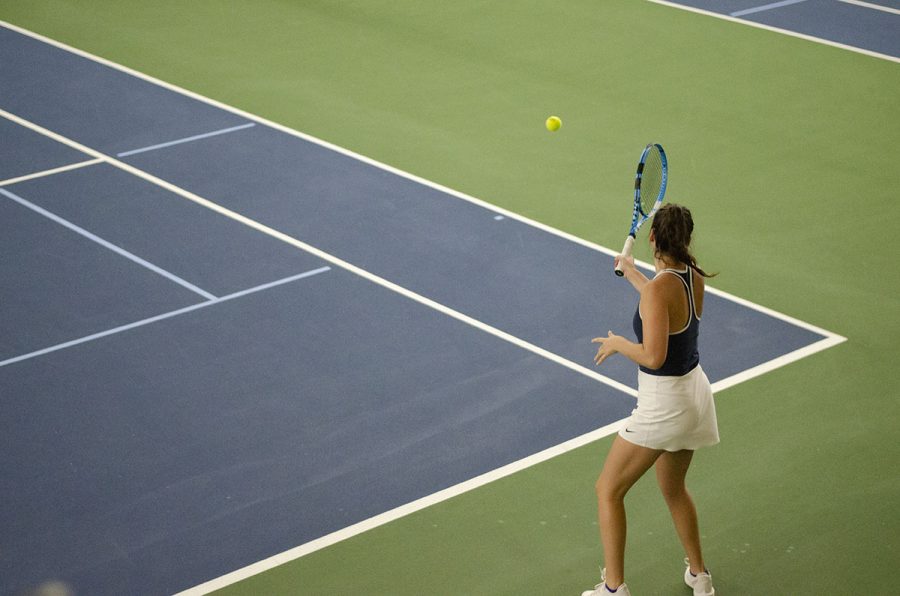 The Blugold women’s tennis team hosted UW-Whitewater last Friday and UW-River Falls and St. Benedict’s on Saturday, coming away with a 2-1 weekend.

According to the Blugold athletics website,  Blugolds fell to Whitewater 1-8 in a hard fought match. Natalie Wijesinghe, a fourth-year athlete, defeated Paige Nierman of Whitewater 6-4 and 6-3.

After Friday’s losses, the team bounced back on Saturday and defeated River Falls 8-1 in a hard fought match, and then went on to defeat St. Benedict’s 7-2 later that day, according to the Blugold athletic website.

Blugolds went 8-0 in doubles and only lost one singles match against River Falls and lost two against St. Benedict’s.

Wijesinghe went undefeated in singles this weekend. Also, her teammates Lindsey Henderson, a second-year athlete, and her partner Elaine Franta, a first-year athlete, went 2-1 in doubles over the weekend, according to the Blugold athletic website.

Tom Gillman, the women’s tennis coach for 12 years, can attest to the ladies’ major improvement over the weekend.

“They had a slow start but had a very good bounce back on Saturday,” Gillman said.

Gillman said his players need to learn from the mental choices that worked and didn’t work to ensure success and to keep improving their game.

“The beginning of the weekend was rough,” Lindsey Hendersen, a second-year athlete, said. “But as the weekend went on we figured out what we needed to fix which majorly helped us.”

Henderson said she loves playing with Elaine, her doubles partner. Despite the wins and losses, Henderson is thankful for the experiences and best friends tennis has given her.

“I’ve been playing higher in the line up than I did last year, but it helps make me focus more,” Henderson said. “I want to do as best I can for my team in that spot.”

Henderson is playing in the doubles and singles line-up this year and says it has been a little tough, but she always perseveres.

“I love playing tennis for UW-Eau Claire mainly because of the team atmosphere,” Henderson said. “My teammates always push me to be the best I can be and it makes playing here so much better and more fun. I have met some of my best friends through playing tennis at UW-Eau Claire.”

Going forth with the season, Henderson believes that coach Gillman has the right idea with keeping a positive attitude and mindset because it will allow all of them to improve their playing.

Alexa Brooks, a third-year athlete who plays third doubles and fifth singles on the team, said she is proud of how the team competed and fought last weekend. She said the girls need to continue giving 110 percent to compete like they did on Saturday.

“I’m excited for the season as it goes on,” Brooks said. “Because all of us are learning more and more as we play these matches, which will make us ready for our final tournament at the end of the season.”

Blugolds are back in action on Friday the 20th and Saturday the 21st in St. Peter, Minnesota for the ITA Tournament. More information can be found at blugolds.com.