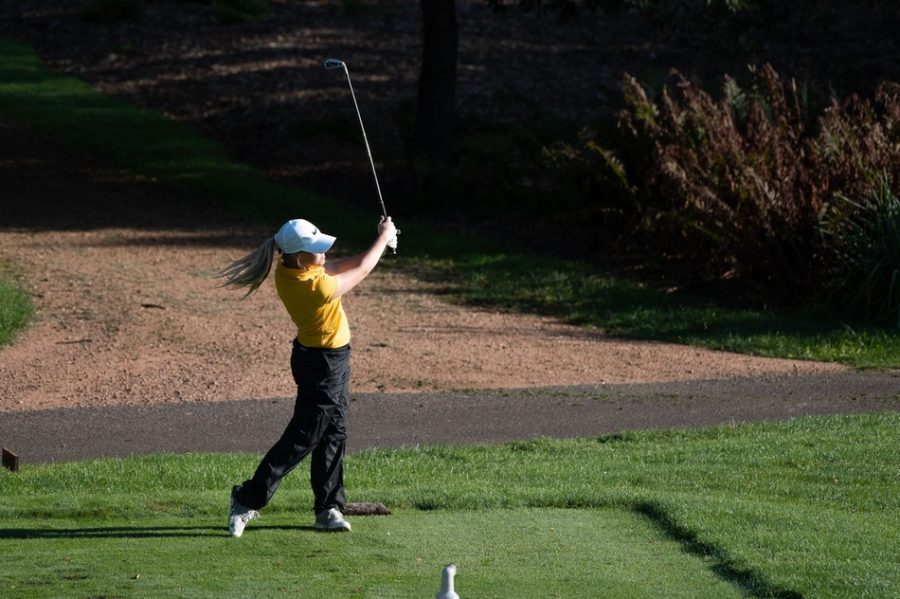 The UW-Eau Claire women’s golf team took on a total of eight other teams in the Georgianni Invite this past weekend and came out in second place.

This was the only home tournament for the Blugolds that will take place this season. Anna Uzpen, a fourth-year nursing student, said this both made the tournament fun and gave the team an edge.

“It’s always fun to play at home,” Uzpen said. “And usually it’s an advantage because the Country Club is one of the tougher courses we play.”

Megan Glaser, a second-year student, and Abbie Ter Maat, a fourth-year student, were two other Blugolds who finished within the top ten for the tournament.

Glaeser tied for sixth overall, shooting a total of 167, while Maat finished with a score of 169 and tied for eighth place. Uzpen said she was impressed with how both of her teammates played.

“Abbie Ter Maat and Megan Glaser played some of their best rounds so far this weekend and we are all very proud of them,” Uzpen said.

Maat said, with the team’s knowledge of the course, they were able to excel in their short game and continuously score well, which led to their successful weekend.

Despite the difficulty of the course and having to play through the rain on Sunday, Uzpen said the team was able to work through the added challenges.

“The courses we play for our home tournament are some of the toughest we play all season, and everyone did very well,” Uzpen said. “We had some rain on Sunday, but everyone was able to push through it and have a great second day.”

Though the Blugolds beat out many of the other teams this weekend, Maat said there are still things the team needs to work on in order to get better.

“There’s always things to improve on. I think consistency is one of them,” Maat said. “You see someone shoot a really good score one day and then struggle a little bit the next day, so if we can get that consistency down, we could be placing higher in tournaments.”

Uzpen said that the team’s short game is another thing they plan to improve on throughout this season.

“Short game is always something we focus on at practice, and we have seen significant score improvements because of it,” Uzpen said. “We will continue to make short game a big focus to keep improving.”

All in all, Uzpen was happy with how her team performed over the weekend and how much effort the team had put in to get better.

The Blugolds will compete in their next tournament on Sept. 20 in the UW-Whitewater Fall Invite.